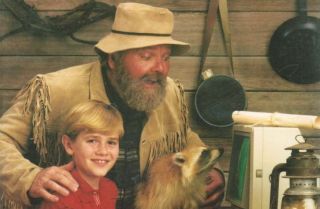 Almost everyone I went to school with played The Oregon Trail, but few finished it. Between running out of food, having your wagon break down so many times the spare parts you brought mean nothing, and the fabled dysentery, it's actually a pretty difficult game. Especially for elementary school kids. The point was to see how far you could get rather than making it to the end.

I'm sad to say I never ended up besting the original Apple II version, as those long-suffering machines were replaced by Windows 95 PCs in my second year of schooling. But with a new OS came a new version of The Oregon Trail with thousands of colors! I made it my mission to see the Willamette Valley come hell or high water. High water, as it turns out, ended way more of my runs than the forces of hell. Don't caulk the wagon, ever.

Any time someone in class would get close to Oregon, especially if they made it to a landmark we hadn't seen before, their plastic computer chair would be surrounded by spectators. Most of my classmates never even made it past the Rockies, so a bit of a competitive scene developed. We learned how many oxen to buy, which supplies to bring, when and where to hunt, and how to make the most out of trading with forts and native tribes.

One day after typing practice one of my classmates made it the furthest any of us ever had… and was greeted with an unpleasant surprise. To actually finish The Oregon Trail, you have to play a twitch-based rafting minigame to traverse the Columbia River and make it to the end. While everything up to that point is methodical, relying on planning, deliberate decision-making, and luck, this evil piece of educational software completely changes genre on you at the end and makes you avoid rocks at high speed. The Columbia would claim many a good run.

Finally, a spring day came when I had very good luck cutting my way across the Lower 48. I had food and wagon parts to spare. I lost only one member of my party (sorry, Tien from Dragonball). And so I arrived at the roaring Columbia for what must have been the fourth or fifth time. I knew the obstacles now. I was ready.

Despite numerous close calls, I floated to safety and finally saw that glorious end screen for the first time. My classmates were calling people over to witness what many of us had dreamed of but none had seen over months and months of attempts. I felt like a minor celebrity for those few, brief moments. A week from then, no one would really care. Others would eventually make it to the end in my wake. But I'll never forget the end of that long journey.

And yeah, I did it as a banker from Boston. Shut up. Let's see you cross America in a wagon if you think you're so smart.