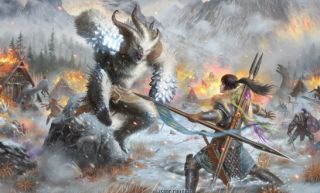 Co-op board game Gloomhaven is finally getting an expansion. I say finally—even though I've only just picked up the giant box for myself recently—but Cephalofair Games has been teasing the thing for three years. Now Frosthaven is on its way, and with it comes loads of new characters and, presumably, another big box.

If you're not familiar with Gloomhaven, it's a co-op RPG where you delve into dungeons and ruins, fight AI-controlled monsters in tactical card-based battles and try to complete your character's personal quest. How your adventure progresses depends on the choices you make throughout the story, which can also affect future scenarios. While you can have a full adventure in a couple of hours, everything's persistent, and when you're done with one character, you can just move onto the next. It's one of the best board games around.

Frosthaven, which was announced in a newsletter from Cephalofair (courtesy of CompassionFountain on Reddit), is being touted as Gloomhaven 2.0 and sounds a bit meatier than your typical expansion. A sequel, really. It's the size of the original game, with 16 new characters, more than 25 new enemies and more than 100 new items. With 100 scenarios to boot, it should keep you pretty busy.

As a group of down-on-their-luck mercenaries, players will have to help the outpost of Frosthaven and deal with new menaces, like the yeti-like algox and aquatic lurkers. Apparently there are intelligent machines wandering around, too, and of course there's the crappy weather to worry about.

Creator Isaac Childes will be at PAX Unplugged to talk about the game and participate in a Q&A, which you can watch in person or on Twitch this Saturday at 3pm GMT/10am EST. The venue is already being prepared, and Childes has posted a picture of the doors that teases some of the new characters.

There's no release date yet, but it will be appearing on Kickstarter in March 2020. It's not the only new Gloomhaven game in development, either. If you find the regular game a bit too intimidating or pricey, Jaws of the Lion might be more up your street. Essentially, it's a smaller, more accessible version of the main game that will come with a 'learn to play' book to walk players through their first few scenarios.

Alternatively, the PC adaptation is already available in Early Access. It looks promising, and thanks to the recent addition of a tutorial, it should be less bewildering to newcomers.