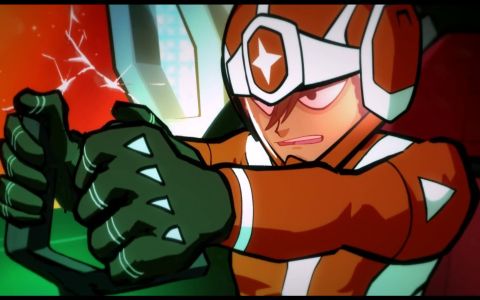 I got cocky. I’d reached the objective marker, but found myself ambushed by an enemy fleet. Too many to take on in such an enclosed space, I opted for flight over fight, hoping to either lose them en route to the extraction point, or isolate them and pick them off one by one. Weaving through a labyrinth of tunnels, I passed by a spider’s lure of space junk, wheeling away a split-second before it lurched forward and grabbed one of my pursuers. I blasted a bulbous plant which released electrically-charged pollen into the path of another, obliterating his shields just in time for him to see a missile salvo arc toward his cockpit. Laughing, I boosted clear…and straight into the hungry grasp of a giant space bug. I died less than a screen’s width away from the exit.

Galak-Z is great when things are going right, but it’s brilliant when they’re going wrong—and there are plenty of ways for that to happen. On one occasion I decided to take things slowly, methodically advancing through a maze-like interior, staying beyond the sight cones of patrolling craft where possible, and luring lone ships into devious traps. Having amassed a tidy haul of scrap, I meandered toward the exit, only to be struck by a jet of flame that had burst forth from a hole in a pipe. Startled, I panicked, shooting a gas tank which whirled around madly before settling on a trajectory that saw it smash into my cockpit and explode, removing my final sliver of health.

So yes, this sci-fi roguelike has rightly earned its fearsome reputation. You will perish, and often, which will reset you to the beginning of that 'season' of levels. I won’t lie and claim failure isn’t frustrating, because it obviously is. But win or lose, you’ll have a wonderful time doing so. It may not always be scrupulously fair, but then it wouldn’t be a roguelike without an element of fortune involved. And, if only occasionally, it can and will fall in your favour.

Luck comes a very distant second to skill, though. Galak-Z might have a steep learning curve, but it’s a reminder that mastering an unorthodox control system can be a hugely enjoyable challenge. At its simplest level, it’s like Asteroids, in that you rotate to aim and thrust to move in that direction—but it’s far more nuanced, giving you a finer degree of control over your ship’s momentum. This is a setup that has clearly been laboured over, tested and retested, tweaked and tightened to something approaching perfection. At times I wondered if I would have preferred a touch more manoeuvrability at the cost of weight, but upon consideration I’m happy with the balance: with maximum thrust speed, your ship is on the brink of feeling skittish. If the odds can at times seem unfair, you’re given the tools to get out of even the stickiest situation, whether you’re strafing, boosting, or even applying your rear jets and reversing out of harm’s way.

Then there’s the juke, which sees your ship spin out of the screen and dive back in. It’s a showboater’s dream move, designed to encourage dangerous play—like boosting towards an enemy, lifting off at the last second to land behind your opponent, and swivelling to unleash a barrage into its rear. Worth the risk? Undoubtedly, though the screeching insectoids, powerful empire fleets and snarling raiders you’ll face are not to be underestimated. They’re often unusually smart, yet capable of errors in judgement—with clever positioning you can get a larger craft to blast its diminutive allies before they race off to call backup, or get two factions to fight one another, distracting them long enough to peel away to safety.

And if the 25 randomly generated missions are all, broadly speaking, salvage quests, Galak-Z works hard to contextualise your adventures. It takes place over five of the aforementioned TV show-style 'seasons', with five episodes in each. It looks and sounds for all the world like a great lost Saturday morning cartoon from the ‘80s - a delightful touch sees each journey begin with a new episode title and writer credit—and while the overarching plot won’t win any awards, the script is light and witty and the performances are terrific—likeable protagonist A-Tak and his officer Beam share a warm rapport. There’s even something moving about the game over screen, which shows an empty helmet with a cracked visor floating by, a surprisingly brutal reminder of the stakes.

Not that you’ll need any further motivation to hit restart. Much as it stings to lose a ship equipped with half a dozen permanent perks, a tighter muzzle combined with three-way fire and bouncing bullets, there are enough thrilling discoveries to dull the pain—indeed, by the beginning of the second season you’ll have a whole new series of combat techniques to learn, though it’d be remiss of me to reveal why. Its final surprise for PC owners is a mode that unlocks checkpoints after every episode rather than forcing you to survive an entire season with just one life. Reaching the end may still be beyond some players, but putting the bountiful rewards of Galak-Z within the reach of many more budding space cadets can only be a good thing.