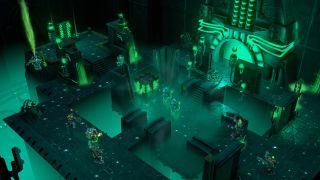 Warhammer 40,000: Mechanicus launched on Steam yesterday evening, and while a Warhammer game launching would normally be just another Thursday, Mechanicus is a bit of a novelty. Instead of being full of great big Space Marines and the things Space Marines fight, typically Orks and Chaos, it’s all about the much more enigmatic Adeptus Mechanicus and their complicated relationship with technology, both alien and ancient. And tactical battles. Lots of tactical battles.

I’ve taken it for a spin a few times now, and so far it’s proving to be one of the best tactical experiences I’ve had with a Warhammer game, at least beyond the table. And thank goodness it couldn’t be more different from the horribly slow (and sometimes plain terrible) Space Hulk adaptations.

The Tech-Priests of the Adeptus Mechanicus find themselves orbiting a forgotten colony on a distant world, underneath which there are rather awful things stirring: dead machines coming back to life. The Necron are waking up and it’s up to the tech-priests to stop or at least mitigate the impending disaster.

Each mission takes place in dungeons that are displayed as holograms inside the ship in orbit, with the more important Tech-Priests ordering everyone from the safety of their flying sanctuary. These dungeon delves are light RPG misadventures that turn the Tech-Priests into crusading archaeologists, dissecting weird technology while trying to purge the world of the xeno influence. There are traps, alerts, choice-based events and generally lots of things to do even before you start fighting.

The battles themselves, even when you’re just facing a few simple Necron warriors, are great. I’m still at the point where I’m encountering plenty of surprises, so I’ve been kept on my toes as scarabs suddenly skitter out of their nests and start healing their masters or when new Necrons suddenly appear out of their sarcophagi. Even at their most basic, the fights are elaborate tactical puzzles. You need to study your enemy, manage ‘cognition points’ so you can move further and use extra powerful attacks, deploy disposable troops and protect your indispensable tech-priests, all while making sure you don’t let the Necrons repair themselves.

Take a gander at Jody’s Mechanicus preview from June if you want to find out more, but first, a few things I really love.

You have to confirm your moves! The last Space Hulk game drove me mad because it almost begs you to misclick, and then gives you no way to undo or avoid the mistake. Usually it ends in death. In Mechanicus, you need to click again to confirm you want your troops to move to the square. It’s a small thing, but it’s saved my life at least once, so far.

There’s no cover system. Once upon a time, this would have been a criticism from me, but bloody hell am I tired of cover systems. I don’t have time to watch a bunch of people cautiously firing from behind walls or around corners—I’ve got xenos to kill. It’s not that there’s no cover whatsoever, and obviously hiding behind a huge wall that completely obscures you means you won’t be hit, but if you can be seen, you can be shot. It makes the fights faster and more fraught with danger. Instead of relying on walls, you need to rely on tankier tech-priests or cannon fodder to protect their ranged buddies.

Tech-Priests are big nerds, and it’s great. Every Space Marine is just a big doofus with an English accent, but the Tech-Priests are historians and engineers and archeologists. Sure, they’re still xenophobic zealots, but throughout their mission they’re studying the Necrons, adapting and arguing about what should be done with the tech they’re uncovering. Should it be destroyed to protect mankind? Used to make the Adeptus Mechanicus more powerful? There are plenty of time when you’re the one making those decisions.

I have about ten different games to play this weekend, but I’ll definitely be making more time for Mechanicus.