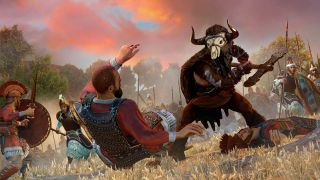 Total War is going further into the past than it's ever gone before: Back to the Bronze Age. A Total War Saga: Troy will pit Greeks, Trojans and their allies against each other as they fight over the indomitable city and far beyond. There are gods, monsters and powerful heroes, but it remains a game grounded in history. A trademark application was spotted earlier in the year, kicking off a lot of speculation, but now we've seen it for ourselves.

Here's everything we know about A Total War Saga: Troy.

When is A Total War Saga: Troy's release date?

Sega and Creative Assembly have only just announced the game, so we've still got a bit of waiting to do. A Total War Saga: Troy will launch in 2020, but we don't have a specific date yet.

Who are Creative Assembly Sofia?

With multiple Total War series on the go, Creative Assembly now has several teams in the UK, as well as a newer studio in Bulgaria. That team used to be Crytek Black Sea, before it was acquired in 2017 by publisher Sega. It's been working on Total War DLC since then and, we now know, A Total War Saga: Troy.

One very long siege wouldn't make for a great Total War game, but thankfully Troy goes beyond its namesake. The action will take place across the Aegean. The geographical area it covers is smaller, but the map will be comparable to Rome 2, so it's still a big ol' sandbox.

Being a sandbox means that history (and myths) aren't etched in stone. The Homeric epic, The Iliad, serves as the main source, and you can follow the path of the literature if you're so inclined, putting together a big army of Greeks (or Achaeans if you want to be pedantic), chasing after Paris and Helen, and eventually besieging Troy. But depending on which of the eight factions you pick, things could play out very differently.

If you're playing for the other side, maybe as Hector, the Trojan prince, you can forget all about doing your old man's bidding and steal Troy for yourself. Or you could just hop in a boat and head to Greece, cutting your enemies off before they set sail.

A Total War Saga: Troy has gods and monsters, kinda

Greek myths are full of gods and monsters, and Homer's epic poems are no different. Creative Assembly Sofia wants to capture the mythical elements of the war, but this is still very much a historical Total War. The studio say's it's trying to present the truth behind the myths.

The gods influence events because the Greeks and Trojans believed they could. Zeus and Ares aren't going to be wandering around and smiting people, but by honouring the gods by building temples or winning battles, you'll be able to reap rewards. Alternatively, you could screw up the relationship your enemies have with the gods.

Monsters and mythical beasties, on the other hand, will show up in battles. We already know that you'll be able to recruit a minotaur to serve as a hero, while conquering a specific region will give you access to centaurs. The minotaur, however is just a burly bloke wearing a bull's skull and wielding a massive axe. The centaurs, meanwhile, are just regular humans on horseback, though that does make them pretty special in a game where there's almost no cavalry units.

Achilles, Agamemnon, Hector and that minotaur cosplayer are some of the heroic characters you'll encounter, blessed with improbably devastating fighting skills. Like Three Kingdom's characters, they can take on entire units by themselves.

There's a ranking system for them, but even if there wasn't they'd probably still be a bunch of showboaters, which is why they like to challenge each other in the middle of the battles. These challenges are a bit like Three Kingdoms' duels, but after a certain amount of time heroes can disengage without penalties, so they're not quite as deadly as their predecessors.

Heroes will be able to undertake their own epic quests beyond the campaign goals. Odysseus, for instance, gets to go on his infamous Odyssey, taking him to Troy and back again as he fights off his wife's suitors. Completing these quests will net heroes with legendary weapons and other benefits, like Odysseus' son joining the fray as a new hero.

What are A Total War Saga: Troy's battles like?

Possibly the biggest change to the real-time battles is the absence of horses. Aside from chariots and the occasional centaur, horses don't really feature in fights at all. Historically, they were status symbols or used for transportation. This historical limitation has forced Creative Assembly Sofia to reconsider combat and give infantry more to do.

There are flanking and anti-flanking abilities, soldiers can switch between different weapons or stances, and the environment now throws more obstacles in their way, including muddy ground that slows them down. Maybe your troops will get stuck in the mud, making them an easy target, but then you order them to switch from two-handed spears to a spear and shield stance, offering them more protection at the cost of some damage.

The Trojan Horse is one of the most infamous and ridiculous military gambits, but since it's so silly and is somehow even less believable than Greek gods kicking off a war just because they're assholes, there won't be a literal wooden horse. Instead, there will be events and actions inspired by it, such as earthquakes that weaken Troy's walls. This is actually a real theory, that the wooden horse actually represented earthquakes because both horses and earthquakes were the domain of Poseidon, who hated the city.

A Total War Saga: Troy has a cashless economy

Instead of amassing loads of cash, you'll need to procure a variety of resources to keep your empire ticking. Wood is needed for buildings, and eventually stone, and if you start running a deficit, don't expect buildings to stay standing. Soldiers, on the other hand, need food and bronze. The rarest and most valuable resource is gold, which can be used to barter with other factions or from visiting foreign traders.

A larger number of specialised settlements will help you keep your stores full, though other factions will also be eyeing them up. Some sources can also be depleted, so you'll need to be the first to exploit them if you want all the gold or wood.

Sandals, mate? Sort yourself out.

A Total War Saga: Troy won't have ship battles, but it will have agents

Total War has yet to make ship battles compelling and, while they did appear in Thrones of Britannia, they won't be returning for this Saga. While ships are heavily involved, what with the Aegean taking up so much space, they're largely for transportation.

Troy will feature agents, however, despite them being missing for a few years. Warhammer, Thrones and Three Kingdoms all found ways to replace them, largely by giving more abilities to leaders and heroes. They're the usual suspects, like spies and priests, and while they won't fight in battles, they can be sent to infiltrate cities or make the gods happy.

Dang, that is one pretty map.