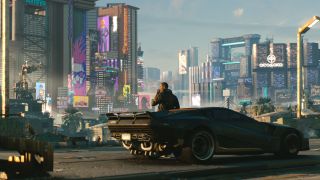 Naming your game after the genre of fiction it’s set in is a funny thing. Imagine if BioWare had spent the last decades peddling its two big RPG series, Space Opera and High Fantasy, before floundering a bit with the release of Mecha-Science-Fantasy. It’s especially bold when the genre in question is cyberpunk—a subcategory of sci-fi that has always been kind of nebulous, its edges as fuzzy as if you’d just swallowed a palmful of Dex octagons.

There’s a bulletpoint list of markers you can run through, sure. Cybernetic limbs. Mega-corporations. Hackers. Neon billboards and Japanese kanji. Ethernet cables that go straight into your skull. Neologisms that sounded cool and futuristic in 1984 but now seem a little silly and dated... and, yep, Cyberpunk 2077 has them all.

Ultimately, though, these are empty signifiers. You could cobble together a generic golem out of these things and accurately call it cyberpunk—I’m looking at you, Netflix’s Altered Carbon—but that doesn’t get at what made these stories exciting in the first place: the sense of a terrifyingly plausible future. Not in that hard sci-fi way, of future tech so detailed you could probably request a spec sheet for it, but more the way technology warps the society that creates and uses it. And CD Projekt Red seems to agree.

“It is deeply fascinating to us to explore the relationship of humanity and technology and how it shapes life in 2077,” says 2077 level designer Miles Tost. “What does this level of technology mean in a world where ‘rich’ and ‘poor’ have basically taken on entirely new meanings in terms of their dimensions?”

The open-world RPG is actually a remarkably good fit for cyberpunk. Like the noir detective stories it originally drew inspiration from, cyberpunk is fundamentally a genre of the city—places where the population clusters, and subcultures can grow quickest around new technologies. And so it feels natural that most of what we’ve seen of 2077 hasn’t really been about player character V. For now, at least, they’re something of a cipher, and Night City is the undisputed star of the game. Well, except for Keanu, maybe.

It’s the promise of Night City that gets you, isn’t it? The promise of an open world as crowded with details and vignettes as it is with cybernetically-enhanced bodies. In the gameplay demos we’ve seen so far, stepping out onto the street means being nearly overwhelmed with chunks of world-building and background dialogue picked out in surtitles that hover over the speaker’s head.

Side quests, an area in which CD Projekt has pretty thoroughly proved its chops in the past, also provide a great chance to squeeze in a few extra perspectives on how this future is shaping its people. And they’re a great way of pulling you through the world, the same way a lot of cyberpunk fiction uses the thread of a detective story.

Even the first-person perspective you’re roaming the city in feels like the right choice. Those soaring, spinner’s-eye shots of Blade Runner’s cityscape might be the one image pretty much everyone points to when talking about the genre, but for my money, cyberpunk futures are best viewed from the pavement.

Castles in the sky

Those stacks of skyscrapers are a way of literalising the rich/poor divide that’s so vital to cyberpunk’s vision of the world. The 1% (or, more accurately, the 0.001%) live clear of the grime, in upper orbit or mega-suburbs or gleaming penthouses. The megacorporations aren’t just a stock genre element—they’re a way of showing how access to technology is mediated by our capitalist overlords. What does an obsolescence cycle look like for an ability-boosting implant? What if your bionic eye came as a mandatory part of your job? And what would happen when you left?

If you wanted to sum up cyberpunk in a single handy soundbite, it’d be the one that Neuromancer author William Gibson has wheeled out in countless interviews: “The future is already here—it’s just not very evenly distributed.”

So if you’re not one of the people craning their necks from down on the street, then you most likely deserve the guillotine, or whatever the cyberpunk equivalent is. Probably just a guillotine with a few cables and neon lights stuck on the side, to be honest. Whether all this matching of genre features and game tropes is happy coincidence or careful design, it’s hard to tell. But CD Projekt certainly seems to understand what has traditionally made cyberpunk interesting.

“To us, cyberpunk explores a dystopian world of low life and high tech in which we focus on street-level stories. Our protagonist is not the kind that is out to save the world,” Tost says. It’s an absolutely textbook definition of the genre, one that takes in the wisdom of cyberpunk scholars like Bruce Sterling, Lawrence Person and especially Mike Pondsmith, creator of the Cyberpunk pen-and-paper RPG, now consulting on 2077.

Everything that’s been shown so far promises a faithful adaptation, a game worthy of the label it has stuck on itself. But I said at the outset that cyberpunk’s main thrill is catching an ugly little glimpse of our own future, and that future surely looks very different now to the way it did two or three decades ago. So, given that CD Projekt clearly knows its cyber-onions, how is the developer intending to spin its own vision out of all those influences?

“It’s funny because we’re trying to re-envision how people from the ’80s and ’90s envisioned the future, and then lace that future with modern nuance,” Tost says. It’s an issue that’s particularly noticeable with the outdated technology that comes packaged with the genre—there’s nothing less cyberpunk than Wi-Fi, for example—but it goes deeper than that.

“I think there’s a degree of truth in assuming that cyberpunk was born out of the fears of people in the ’80s and these fears were consciously exaggerated enough to form a separate genre,” he says. “The image of megacorporations you know from 2020 [the second edition of Pondsmith’s Cyberpunk RPG] was born out of fears of privatising the state and asking: ‘What would you do if democracy was a capitalist-controlled farce?’

“And we’re adding some contemporary scares to that as well. How has social media, for example, evolved in 2077? What power does it hold?”

The game’s main way of addressing this topic seems to be through ‘Braindances’. As Tost explains it, these are, “a way of experiencing someone else’s past experiences, including their emotions, what they felt,” in a virtual reality representation—a localised dose of cyberspace. It’s an idea with its roots in the tabletop RPG’s sourcebooks, which predate the likes of Twitter or Facebook, but it’s easy to see how it could be extrapolated out into something with more timely social media parallels.

Braindances are presented as a form of escapism from the grim realities of life in Night City, with people using them to play tourist inside celebrities’ heads and live out staged fantasies that appear to be real. It’s Instagram for your frontal lobes, or Twitch by way of the holodeck.

Among the modern fears shaping 2077’s world, Tost also namechecks the specter of climate change—a fairly inescapable part of our current future. In the game, global warming is apparently the reason for Night City’s large Haitian population, presumably because the island nation is now underwater.

Whether CD Projekt actually has anything interesting to say on either of these topics remains to be seen—but hey, that’s what playing the game is for.

There is one aspect of 2077’s future that has already raised a few red flags, though: its treatment of body augmentation. Whether in the form of prosthetic limbs or brain mods, this has always been a big theme of cyberpunk stories, and one that can be harmful if not dealt with properly. And all the way back to the original RPG, Cyberpunk’s handling has always been a little clumsy.

In the original tabletop game, adding modifications to your character’s body caused a literal ‘humanity’ stat to drop (though the most recent edition takes a more nuanced approach). That doesn’t seem to be present in 2077, but Tost outlines one of the consequences which has carried over: “A mental illness, that in 2077 is still very poorly understood, called Cyberpsychosis can cause people to run amok when they implant themselves with too much cyberware and in the process lose their humanity.”

There are no mechanical implications to cyberpsychosis—this can’t happen to the player, Tost says, because it’d be an instant game over—but it’s still integral to the game’s fiction, and the presence of a ‘mental illness’ that’s self-inflicted by too much technology sets alarm bells ringing. It’s like CD Projekt talking about the idea of the natural body being ‘sacred’, and augmentations ‘profane’. This stuff might sound OK, until you apply its logic back to the real-life present and realise the things it says about, for example, disabled and trans people are potentially offensive.

One of the benefits of reconstructing a genre three decades on from its initial peak should be the chance it offers consider, with modern sensitivity, what aspects weren’t treated well the first time round and address them. Maybe this will play out in the full game—there might well be a side quest dedicated to exploring the topic more thoughtfully and sensitively—but the early signs are a little troubling.

But there’s no question that 2077 gets the genre, whatever your fuzzy definition. All the cool surface bits are there, presented more lavishly than we’ve ever seen before: the chrome-and-black style, the nostalgic-meets-futuristic tech, the grime illuminated by bursts of neon. CD Projekt knows the right references to drop, and the studio has demonstrated that its understanding runs a little deeper than that.

For better or worse, the game will likely overwrite the public understanding of what ‘cyberpunk’ means. This is a genre whose boundaries are defined by precious few texts—the undisputed cyberpunk canon consists of roughly one book—and no straight-up cyberpunk work has reached the audience CD Projekt is going to.

So yes, Cyberpunk 2077 is cyberpunk. Duh, it’s right there in the title. The important question now is exactly how the developer chooses to define and explore that.