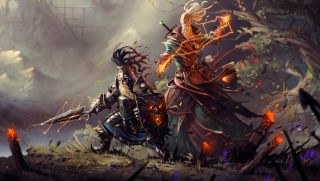 Divinity: Original Sin 2 Kickstarter campaign is going so well it passed the first stretch goal before stretch goals were even announced. Larian currently has $856,356 in pledges, far surpassing the $500,000 asked for. That means a hardcore "strategist mode" and the "pick a skill tree" tiers are already unlocked.

Stretch goals go all the way to $1.5 million. The ominous-sounding "HALL OF ECHOES" is the final tier; that will be explained later. Others include racial skills for dwarves and lizards, and the addition of the undead as a playable race. The video above covers the new stretch goals in more detail and looks ahead to PAX, where we will also be in force this weekend.