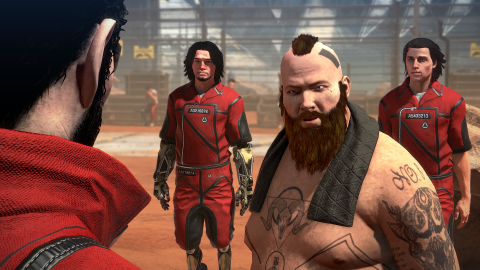 A well-designed level that forces you out of your comfort zone and fills in some of Adam Jensen’s backstory.

The Penthouse is a maximum security prison balanced on top of a mesa somewhere in the Arizona desert. Built to house augmented criminals, there are cameras, drones, armed guards, laser grids, and automated turrets everywhere you look. The perfect playground for an immersive sim. But when Jensen first arrives, working undercover for Interpol’s Task Force 29 and posing as a criminal, he’s implanted with a chip that disables his augmentations. This forces you to adopt a new play style and not rely on your augs so much, at least until you find a way to reactivate them.

You’re in the Penthouse—or the Penley T. Housefather Correctional Facility to give it its full, exhausting name—to locate a fellow undercover agent and squeeze him for intel about a terror attack. But you’ll need to find him first, which is easier said than done when you’re surrounded by aug-hating guards with itchy trigger fingers and hardened criminals. The first hour of the mission is like a cyberpunk Shawshank Redemption, with Jensen wandering the prison yard, talking to other inmates, and getting the lay of the land.

This was Jensen’s first undercover job with TF29, and it’s presented as a flashback. In the present day, just after the events of Mankind Divided, he’s in psychiatrist Delara Auzenne’s office recalling what happened, and sometimes you’ll hear their conversation as you play. I backtracked to finish an optional objective and heard her ask Jensen why he decided to go back, which was a nice touch. Although at one point I did fall off a balcony and die, and on the game over screen she said “Try to concentrate, what really happened?” as if Jensen had said, while telling his story, “And then I fell off a balcony and died.” Still, it’s cool to see them experimenting with storytelling.

The prison doesn’t feel as intimidating as it should. Partly because you’re a metal-armed superman. But also because Eidos Montreal’s attempts at tough-guy prison talk is laughably bad. “He’s been hookin’ and crookin’ since he was dancing in his daddy’s balls.” says a topless man called Flossy, who’s wearing a pork pie hat for some reason. A lot of the dialogue is clunky and awkward, and about as grittily authentic as Jailhouse Rock, but overall it doesn’t really matter. The story and characters are the weakest link in A Criminal Past—it’s the level design that makes it worth playing.

The prison is, like the main game’s Palisade Bank, an intricate puzzle-box waiting to be cracked. And is, arguably, more interesting because of how tight security is. One of your first objectives is reaching cell block B (Jensen’s stuck in A), and there are a number of ways to do this, making use of all of the game’s systems. There are vents galore, naturally, but you can also do a favour for a fellow inmate to get access to a security card. The scarcity of items adds another layer of challenge, making the discovery of a multitool or biocell a valuable one, encouraging you to make smart use of them.

When you finally make it to block B, your red jumpsuit—the uniform of A block prisoners—will stick out a mile. You can try and sneak around the guards to reach your contact, but a bit of exploration will lead you to a yellow jumpsuit, allowing you to wander the block freely. The level’s full of little details and shortcuts like this, which allow you to bypass tricky stealth sections if that isn’t your strong suit. Deus Ex is, when it’s at its best, a game about choices, and A Criminal Past offers plenty of that in its 6-7 hours.

While previous DLC System Rift felt like a retread of Mankind Divided, this mission is much more distinct. The prison setting is radically different from anything else in Eidos Montreal’s rebooted Deus Ex, and the restrictions it places on you forces you to really dig into the game’s systems. The characters are one-dimensional and the story doesn’t really go anywhere, but it’s a great level, and well worth doing time for.

A well-designed level that forces you out of your comfort zone and fills in some of Adam Jensen’s backstory.