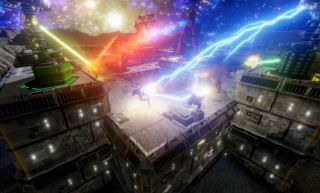 Defense Grid 2 earned a very respectable score of 83 in our review, and now has a chapter's worth of free demo on Steam, and is currently half-price to boot. It's a game about building towers in space to stop an aggressive force that can only attack attack in single-file down narrow convoluted pathways. But they have a weakness! Oh wait, it's that.

What they lack in imagination they make up for in numbers and variety. There are big ones, little ones, flying ones. You can place some AOE attack towers to slow them down, sniper towers to target bosses. You know the drill. It's tower defense, as it always was and always will be, but good tower defense, with shiny lasers and a difficulty curve that gently romances the part of the human brain that enjoys ordering and upgrading things to maximum efficiency.

A video? Why not. I've played hours of this game and still don't know what the enemies are. Tiny space frogs?