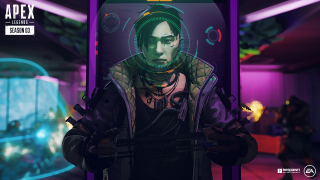 It’s only my tenth time playing as Crypto, the newest character in Apex Legends, and I’m going up against pro competitors seven years my junior. God help me, if I can’t kill them, I’m going to at least spot them for my much more accomplished squadmates.

On the way down from the dropship, most of us manage to land on some cargo crates suspended high in the air in this rundown shipping yard. It’s almost a perfect hiding spot, and with the echo of gunfire quickly closing in, I whip out my surveillance drone and send the little guy up in the air.

I steer the drone toward the edge of its 200 meter limit, highlighting any enemy players stalking the grassy slopes outside the shipping yard. Sure, I'm hanging back far from the fight, but an eye in the sky feels mighty valuable in Apex, where only two heroes have any reliable vertical mobility. For a game that’s so focused on aggression, Crypto feels zeroed-in on support, and it makes Apex a bit more enjoyable for a Mercy main like me.

VIDEO: A closer look at Crypto, and Apex's new map.

Crypto's skillset is subtle, but effective

Everything special about Crypto revolves around that drone, including his other abilities. His tactical ability is the drone itself, which you can toss out at almost any time after your initial jump. Crypto becomes stationary (think Overwatch’s Junkrat and his tire) while the drone can fly anywhere in a pretty impressive radius. You can still ping enemy locations and whatnot from the drone’s POV, but the special bit is that he’ll automatically highlight any enemy he sees within 30 meters, allowing your whole squad to see them through barriers and highlighting their outline, so long as they’re still within 30 meters of the drone.

It’s kind of a gamble, since the drone emits a noticeable hum, and only takes one, maybe two shots to down it, and enemies are automatically alerted when they’re scanned. As the saying goes, knowledge is power, but it can be a flimsy advantage if your enemies are smart.

Helpfully, the drone transmits information even when you're not controlling it. You can choose to leave the drone in place at any point, and it’ll keep watch over that 30 meter area, automatically pinging enemies. At any point, you can recall the drone with a single button push and throw it back out almost immediately. If someone destroys the drone, you’ll have to wait about 10-15 seconds for it to respawn on you.

Crypto’s ultimate ability, an EMP blast, is a little more direct. Again, you’ll have to toss out the drone, fly it into your area of choice, and with a surprisingly large radius (enough to cover most of a large building’s width), you’ll slow down enemies, deal up to 50 armor damage, and disable traps.

As I described in my other story, Season 3’s new map, World’s Edge, is full of long-distance sightlines, meaning you’ll be able to see enemies coming from far away as long as you’re looking. As you can imagine, Crypto’s high-flying drone helps out immensely here, especially in finale situations, allowing you and your squadmates to properly position yourself for an ambush or retaliation. If you know you’ve got a chokepoint, all the better, as you can quickly cross the distance as the drone and set him up nearby the choke to alert you of anyone laying in wait.

The drone synergizes well with other abilities

I love playing as Bangalore—there’s nothing more satisfying than landing a perfect smokescreen. Her ability is just one of many that ought to pair well with Crypto’s drone’s tagging. Find yourself in a firefight and need an easy way out? Throw some smoke down between the two parties, zip your drone out, and watch them panic as you emerge from the mist to eliminate them with prescient precision.

Though I think Wattson will feel left behind in the new map’s wider areas, Crypto’s drone and her electric fences could pair very easily during later stages of a match. There’s plenty of urban areas where one long fence could force an enemy team to take the long way around, and if you need to hunker down and wait things out, the drone could alert you of anyone entering from one particular direction, prompting characters like Wattson and Caustic to lay their traps more efficiently.

Playing Crypto kind of feels like being an esports observer

I write a lot of Fortnite guides for PC Gamer, and a part of the job is going into my match replays and using the freeform camera to take snazzy pictures of various collectibles. It was funny to me how much playing Crypto is a lot like being back in a Fortnite replay, or watching from on high during an esports event. I half expected some caffeine-fueled commentator to chime in whenever my drone flew over a particularly action-packed fight.

Even though I happened to be playing against pro streamers, I never felt like I couldn’t take my time as Crypto to survey a scene and make a much smarter move than the old me would have.

As a support main in almost any competitive game I play, I’m excited to see how Crypto fares in a meta known for its aggression. It can often feel like all the Apex highlight reels you see are people doing amazing no-scope headshots and racking up the kills, but I really appreciate that Respawn has seen fit to once again design a character who tries to think outside that box.