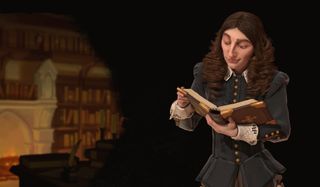 Civilization 6: Gathering Storm is almost upon us, bringing foul weather, natural disasters and climate change with it, and it pays to be prepared. Eight new civs and nine new leaders have joined the roster, and to help you skip all the time you'll inevitably waste just as you're about to start your first game, we've gathered them all here, along with the most important things you need to know about them.

To see what you're in for, you can also check out my Gathering Storm review. The weather might be bad, but the expansion is good.

Kupe and the Maori are a great fit for Gathering Storm. It's a coastal civ with a conservationist bent. Thanks to Kupe's leader ability, the Maori begin at sea and generate extra culture and science for every turn they spend exploring instead of settling down, and then their first city gets a free builder, extra population, more amenities and additional housing.

When you do put down roots, keep an eye out for wood and rainforest hexes. They yield more production for the Maori when they haven't been improved, so you'll be able to use that first free builder for mines, farms and fishing. Speaking of which, fishing boats produce more food and help you expand your borders by acting like a culture bomb. Thanks, fish!

Hungary, led by King Matthias Corvinus, is an aggressive civ that should definitely be considered if you fancy a game full of wars and, ultimately, a domination victory. That said, playing as Hungary is as much about making friends as it is destroying enemies, and the more allies it has, the more powerful its armies become. It's rather fitting for an expansion so focused on cooperation.

Corvinus' unique ability gives units levied from city-states extra movement and combat strength, while upgrading them costs nothing. If you keep making city-state friends, you'll be able quickly bulk up your army with tough, mobile troops when you find yourself at war. This pairs rather nicely with the Black Army, which gets stronger with every levied unit it's next to. The Huszár light cavalry unit, meanwhile, gets more combat strength for every alliance you're in. It pays to have mates.

I'd almost recommend not playing as Kristina, but only because you can't enjoy her animations on the diplomacy screen unless you're playing against her. Her glances—and scowls—speak volumes, and it's clear she'd much rather be getting on with her book than talking to you.

If you do decide to pick Sweden and Kristina, you'll probably want to aim for a culture victory. The unique buildings and abilities are all built around enhancing Sweden's culture and generating incredible works or art and impressive individuals. Great people also generate diplomatic favour, which can then be spent on voting in the World Congress, potentially letting you gain more of the points you'll need for a diplomatic victory, as well.

Canadians, at least in Civilization 6, like it cold. Everything is better when it's chilly and the ground is frozen, apparently. Play as Canada and you'll want to make your home in the tundra, where you'll be able to farm the tundra tiles and net twice the number of resources from both snow and tundra. Purchasing these tiles is also reduced by half, so you can quickly expand and gobble up more precious, freezing territory.

Laurier and Canada are a good showcase of the new diplomacy system, too. Diplomatic favour can be earned through tourism, while helping out during emergencies or in competitive events will net you even more than normal. Either a culture or diplomacy victory seem like sensible paths here, and building lots of Canada's unique building, the ice hockey rink, will help with both, generating more culture and tourism, and thus diplomatic favour.

Pachacuti and the Incan Empire are pretty deft at going it alone, so if you're looking for an isolationist game where you just carve out an empire hidden behind mountains, this is the civ for you. The Inca can work mountain tiles, as well as getting lots of benefits from building near them, and while they'll be a big obstacle for potential invaders, Incan units will be able to move through them thanks to a much earlier version of the mountain tunnel improvement.

Even if you're steering clear of other civs, you can still benefit from traders. Incan domestic trade routes generate more food when cities are built near mountains, so by setting up loads of internal trade routes early on, you can rapidly grow your cities and put your new citizens to work on your unique improvements.

Phoenicia is an adaptable, nautical civ with extremely loyal citizens, which is good news if you are sick and tired of people revolting just because you're a bad leader. What do they know? Thanks to Dido's unique ability, the Phoenician capital can also be moved to any city containing the unique cothon building. It's a broad ability, too, unlocking extra trade routes, as well as more production towards districts. You'll want to build a government plaza to take advantage of those benefits, though.

If you're worried about those new trade routes being plundered, the bireme comes in pretty handy. It's faster and stronger than its contemporaries, and it protects any trader within four water tiles. If it takes damage, just send it to a city with a cothon. It will heal up in a single turn.

Money won't solve all your problems, unless you're Mansa Musa, the richest man in the world. Mali is a desert civ, gaining loads of benefits from settling on desert tiles. Trade routes earn extra gold for every desert tile within the city's borders, and the more desert tiles you have, the more food and faith you'll generate in your city.

The huge amount of gold and faith you'll earn from trade, mines and the Suguba district will let you just buy buildings and units, which you'll also be able to do at a reduced cost. So while there are a few problems that can arise when most of your abilities are tied to a specific kind of tile, you can just outspend any obstacles.

I respect the confidence of the Ottomans. Everything is 'great' and 'grand', so they're obviously pretty sure of themselves. So sure, in fact, that they're willing to put it to the test by conquering the world. The Ottomans are a military-minded civ, and Suleiman bumps their unique unit count up to two, like Hungary. Unlike Hungary, however, they're not quite as interested as making friends as well as enemies.

With extra strategic resources, stronger siege units that can be fielded quickly and fancy jannisary and corsair, the Ottomans are in a good position to start throwing their weight around. It's not all about war, however, as Suleiman also has a unique governor, the Grand Vizier, with his own promotion tree and the ability to be placed inside other civs. Sneaky!

Eleanor of Aquitaine—England and France

Eleanor is an unusual leader in that she can lead either England or France, allowing you to match her skills with those of two distinct civs. Neither of them are new, but Eleanor's unique ability should tweak them quite a bit.

Court of Love causes nearby foreign cities to lose loyalty every turn, based on the number of Great Works in French or English cities. When those cities finally lose all of their loyalty, they skip the free city stage and instantly join England or France, so you don't need to wait around or worry that another civ might swoop in and pinch it before it flips. It's a great way to expand without getting your hands dirty, and you won't piss off the rest of the world quite as much.

And that's your lot—every new leader and civ in Civilization 6: Gathering Storm. Which do you think you'll take for a spin first? I was all about diplomacy and culture when I was reviewing it, so I'm rather tempted by the Ottomans for my next game.

Civilization 6: Gathering Storm is out on February 14.