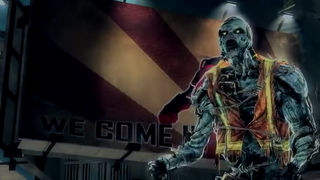 Call of Duty: Online, the free-to-play, online only, microtransaction-fueled multiplayer shooter published exclusively in China, is adding robot zombies to the game. I didn't miss an “and” there—these enemies are mechanized walking corpses, or, rather, robots that once lived and have come back from the dead. Actually, I'm not sure what they are, other than cooler than anything I've seen in a Call of Duty game lately.

Listen, Activision: We need this.

As our recent review of Call of Duty: Ghosts explains beautifully , we're a little burnt out on vanilla Call of Duty. Space fights, dogs, and aliens are just not going to cut it anymore. Plain zombies and zombies of the Nazi variety have been played out since 2008. Robot zombies, however, with the possibility of a robot zombie dog I spotted in the amazing trailer above? Well, now we're listening.

Call of Duty: Online is developed by Raven Software and Activision Shanghai. It's published, marketed and distributed by Tencent Holdings, a huge Chinese company that operates social networks, web portals, online games, e-commerce, and almost any other media or online business you can think of (it's the third-largest internet company in the world). Activision had to partner with Tencent or another Chinese partner in order to publish the game, as Chinese law requires that any Western studio wanting to release a game there work with a local business partner.

CoD: Online was designed specifically for the Chinese market, where players with less disposable income are more likely to spend smaller amounts on in-game purchases, as opposed to buying full, $50-$60 retail games. As we noted back in July 2012 , since free-to-play games became a huge business in North America and other Western markets, it's worth keeping an eye on games developed for the Chinese market. Shooters like Crytek's Warface have used a successful Eastern release as a springboard to enter the Western market.