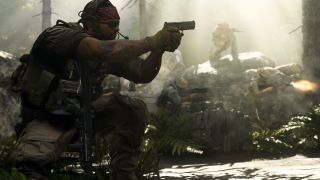 Call of Duty: Modern Warfare almost had a feature called "buddy boost". As Prima Games explain, it would have allowed players to cooperate to reach higher ground, one player going into a squat and the other clambering over them to attain a better position.

But the feature was cut from Modern Warfare because, as multiplayer map design director Jeffrey Smith explained, "it's really hard to get some random person to cooperate with you. You have to let somebody kind of climb up you and get you up and they would get up there."

People just weren't likely to cooperate often enough to make it worthwhile, especially as it left the player providing the boost "waiting in a really awkward squat position" that made them easy for other players to take out.

Apparently they didn't just pull the buddy boost out, but altered the maps as well with the aim of making them more interactive.

Call of Duty: Modern Warfare is out on October 25. The PC early access beta starts September 19, while the open beta starts on September 21.