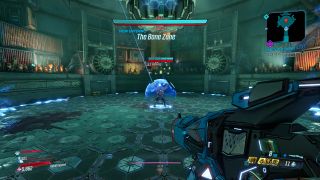 Borderlands 3's combat is generally a good time, but the Killavolt boss in Lectra City just straight up sucks. Despite the massive blue bar over his health signifying an overshield that in every other instance is weak to shock damage, Killavolt's is immune to shock damage. Guh. Worse, he doles out some annoying AoE attacks, one of which was bugged to bee too difficult before Gearbox changed it.

Let's help you kill the jerk with some frustratingly necessary Killavolt boss tips.

Need some better loot? Stock up on rare guns with Borderlands 3 Shift codes.

Focus on neutral DPS during the shielded phase

Find the weapon that does the most damage (that isn't shock damage) to take down his shield. His shield, normally weak to shock is immune to shock. It's baffling. I hate it. But since we have to play along, just focus on high damage.

Incendiary weapons melt red bars, which typically denote flesh. To make his unshielding phase go faster, use a fiery tool to burn him down.

Shoot him in the back and near his little toes

Killavolt is really hard to strafe behind and hit big front-facing shield is discouraging, but don't waste time waiting for the perfect shot. Pop his little toes full of lead, and when he charges, give his back a bullet shower.

Shoot him in the dick, too, I guess

As part of a joke, Killavolt's groin is also his weak spot. When you get an opening, aim there rather than his head for critical damage.

Splash damage is your savior

But because Killavolt is so difficult to hit, weapons that inflict splash damage are the most efficient choice. Favor the grenade launcher variants of shotguns, rocket-firing pistols, load up on grenades, rockets, and anything that can slip under or around the shield, even with terrible aim.

Keep moving and jump around the middle during his AoE

Killavolt lights up the floor with electricity, which is fairly easy to avoid if you just stay moving throughout the whole fight. The floor will light up in yellow where the AoE is about to occur, so keep an eye on the ground just in case.

Save some bandits for a Second Wind

Bandits will spawn in a certain intervals. Take all but one out if you're having a tough time. Keeping one mosquito in your ear is annoying, sure, but if Killavolt knocks you, that bandit could make for an easy kill and Second Wind recovery.