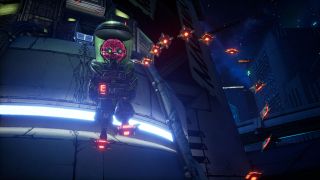 How do you equip class mods in Borderlands 3? If you have class mods sitting in your inventory that you seemingly can't do anything with, don't worry, you're not missing something. Despite finding some early on, you can't actually equip them during the first few hours of the game.

Class mods are a useful bonus to your character that power up your class abilties, but they can only be used after a certain moment in the story. Read on below to get the full rundown on class mods.

How to equip Borderlands 3 class mods

Class mods are useful as they add further bonuses to your character while they're equipped. Specifically they add further points to the abilities in your skill tree—hence why they are class specific. You'll know that your chosen class mod is providing its boons because the points in the skill it boosts will be higher and highlighted in blue. The rarer the mod, the more bonuses you get.

But we're getting ahead of ourselves. To equip class mods in Borderlands 3 you have to finish the first main quest on Promethea. This hour-long mission culminates in a fight with Gigamind (pictured above).

When you complete the mission you'll be able to add the class mods languishing in your backpack to your character (near where your grenades are selected and beneath your equipped guns). It's a little confusing that you can pick these items up before you can actually use them, but there you go.

Also, a handy side note: you can still pick up class mods that don't apply to your character. From there you can either share them with a friend via the 'Social' menu or just sell them if they're rare enough to fetch a tidy profit.