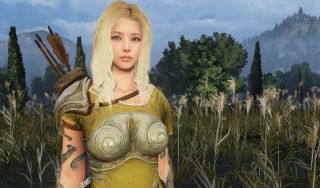 The first half of Black Desert Online's 2020 roadmap was revealed earlier this week, giving players a sneak peek into what developer Pearl Abyss has planned all the way through to summer, including a new feature where players can compose music and play it on instruments—which definitely won't result in towns becoming overwhelmed with would-be bards thrashing out Sandstorm on a lute.

You can look at the Black Desert Online 2020 roadmap here, but you won't have to wait long for one of its most exciting additions. Coming on January 22, The Guardian will join the roster of available classes. This northern warrior wields a massive battle axe that she uses to cleave through groups of baddies and plays similarly to her male counterpart, the Berserker, which is to say they both excel at charging into the thick of it.

In addition to The Guardian, several classes will get new customization options through the new Succession system. When players reach a certain level, they have the option of choosing Awakening, which gives them a new weapon and a suite of abilities to use, or they can choose Succession, keeping their current weapon and abilities but with enhanced powers. Throughout the first quarter of 2020, the Witch, Wizard, Striker, Mystic, Lahn, and Guardian will all receive their new Succession abilities.

Black Desert Online's 2020 roadmap also includes some features that'll benefit everyone. Sometime this spring, players of the Shai class will be able to compose and play their own music. A new region called Papua Crinea, where adorable otters and "Papus" are locked in a bloody conflict, will also be added. So sad. Around summer, players can expect another story chapter and accompanying area called O'dyllita.

You can check out the full roadmap here. It will presumably be updated later this year to reveal what's coming in the latter half of 2020.

Steven Messner
Steven enjoys nothing more than a long grind, which is precisely why his specialty is on investigative feature reporting on China's PC games scene, weird stories that upset his parents, and MMOs. He's Canadian but can't ice skate. Embarrassing.
See comments