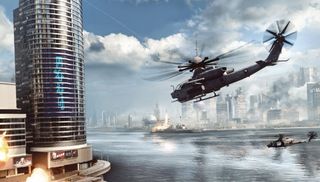 Battlefield 4's impending release is clearly taking its toll on EA employees. Here, two gaunt-looking men sit down to talk beta release plan. One of them is Patrick Bach, executive producer of the shooter sequel. And in case you're worried, I've already checked: this video is certified "Levolution" free.

The open beta kicks off on the 4th of October. However, if you're a Premium member or - god forbid - own Medal of Honor: Warfighter, you can slip in early, on October 1st. The beta will run until October 15th, and will let participants try out the skyscraper bothering Siege of Shanghai map.

As you can see from the video, DICE are pretty keen to promote the idea that the test is more than just a glorified demo, stating that tweaks and changes will result from the feedback. Whether you believe that or not seems beside the point: come the start of next month, we'll have a level to goddamn Levolute. Is that not reason enough to take a look?