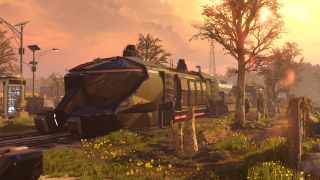 A new post on the XCOM site shows some new suburban zones, so you can see exactly where your prize much-promoted sniper will be bleeding out in when XCOM 2 comes out on February 5. They're a shift away from the recently-released wilderness shots, showing shopping malls, gas stations, and other places that aliens shouldn't be. XCOM 2's levels will be procedurally generated, so we're really getting a look at the assets that the game will be using to build levels.

There were some urban environments in Enemy Unknown and Enemy Within, but the sequel's improved fidelity should better create the horror of uncanny events happening in familiar places. The only indications of the futuristic setting are some slick cars and a 10/10 evil train, quite different to the Advent shots that Firaxis released a couple of weeks ago.

These shots seem to be weekly releases. What will be next? Space station? Volcano lair?