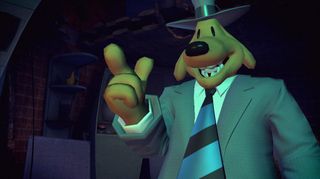 Find all previous editions of the PCG Q&A here. Some highlights:
- What unreleased game of 2020 are you most looking forward to?
- What achievement did you go to ridiculous lengths for?
- What game do you keep restarting but never finish?

We're spoilt for choice when it comes to mystery games on PC, and that's why we've got a whole list of the best detective games. From adaptations of fictional greats like Sherlock Holmes and Hercule Poirot to oddball adventure game heroes, there are plenty to choose from.

Who is your favorite videogame detective? Here are our answers, plus some sourced from our forum.

Stevie Ward: The only true answer to this is whatever gamer finally managed to catch Carmen Sandiego: The founder of the Villainous International League of Evil has been evading us for decades. Luckily gamers worldwide have been working as detectives for ACME to find and catch the master thief, but with a slew of punnily named henchmen, clever wordplay and a dashing red getup, Carmen has managed to leave us completely entertained but normally, without our final catch. Whomever finds her will be the greatest detective of them all. Which leads me to wonder, where in the world is she right now?

Joanna Nelius: Francis McQueen isn't your ordinary detective. He hunts the supernatural, everything that goes bump in the night—even arguing spirits of long deceased authors and poets, though sometimes people messing around with the occult are the ones he really needs to worry about. McQueen also has a partner, Officer Dooley, who comes with him on all his cases. Dooley is quite dense, and I don't know how McQueen puts up with that guy, but it makes for some hilarious banter. McQueen is dedicated, focused, and serious, the complete opposite of Dooley. That's not to say Dooley doesn't take his job seriously, he just likes having fun. McQueen, on the other hand, might be a little too straight-laced. Does he like having fun? I assume so, but the occult is no laughing matter. Unless you're Dooley.

Christopher Livingston: I never really played much of the Telltale Sam & Max games, but in good old pixelated 2D Sam and Max Hit the Road, the intrepid dog and irascible lagomorph detective duo solved the case of the missing Bigfoot. They only needed a little help from me to try using every item on every other item as they crisscrossed the USA visiting the largest ball of twine, the celebrity vegetable museum, and of course Mount Rushmore Dinosaur Tarpit and Bungee Jumping National Park. There have never been two finer nor more dangerous detectives.

Lauren Morton: Paul isn't the flashiest detective on the circuit but he's for sure the goodest. Mr. Prospero has that handy modern Sherlock ability to accurately recreate a scene based on a few clues and envision it in 3D like a human projector. Unlike your other Sherlock archetypes, he isn't an emotional wet blanket that dispenses sarcasm and assholery when you wring it. He's just a swell guy trying to solve the case. Even when things take a turn for the decidedly supernatural and spooky in Red Creek Valley, he keeps on keepin' on motivated by, what? A letter from a young boy asking for his help. Paul's an A+ detective for his ability and his rare compassion. Yes, I know how he ends up solving the mystery of Ethan's disappearance but if you give it away in the comments I'll do a murder on ya.

Jarred Walton: He's the greatest detective ever! Or maybe he's the greatest psychic detective, or rock star in hiding only pretending to be a detective. Whatever. There are so many options here, and Disco Elysium is wonderful at letting you forge your own destiny. Sure, you could save scum right before a roll of the dice to ensure you get the positive result, but it's often better to just live with the failure and see how that changes your character and the story. Can't quite manage to convince someone that you're their friend? Don't worry—he'll figure out a way around that obstacle. Or not. Maybe he'll just go back to his wild bender for a while. One way or another, though, he'll 'solve' the mystery of the dead guy hanging in the tree, and challenge your thinking in the process.

Bigby Wolf, The Wolf Among Us

Jody Macgregor: Shout out to Kyoko Kirigiri from Danganronpa, who remains calm and collected even while helping solve the murders of her classmates trapped in a nightmare high school by an evil bear. But I'm gonna give it to Bigby from The Wolf Among Us, the former fairytale monster turned grizzled noir shamus who deals with crime in Fabletown.

Bigby's a cross between Jack Nicholson in Chinatown and Jack Nicholson in Wolf, excellently voiced by long-term journeyman voice actor Adam Harrington who has a bunch of credits to his name like "Soldiers", "Additional Voices", "Nemesis Orcs" and "The Local Pedestrian Population". Harrington really rose to the occasion, giving the literal lone wolf a personality and heart—especially in the scenes with his gal Friday (Snow White) and his drinking buddy (Colin the Pig).

Andy Chalk: Zellner is technically not a detective—he's a Swiss police constable—but he loves detective novels and does his best to help with the pursuit of The Raven, Europe's most notorious jewel thief. And his occasionally bumbling manner hides a keen eye and incisive mind. A lack of ambition has relegated him to the lowest ranks of the constabulary, but he's an outstanding investigator, when he's not being yelled at for poking his nose where it doesn't belong.

He also bears an unmistakable resemblance to Hercule Poirot, Agatha Christie's legendary detective: Like Poirot, he's an easy man to underestimate—a mistake he quietly plays to his advantage at every opportunity—and a large portion of The Raven is spent on a train filled with odd and interesting characters, before moving to a steamship on the Mediterranean, and ultimately, Egypt's Museum of Antiquities.

bytetracker: Edward Carnby of the original Alone in the Dark series.

FrancoEstefano5: My favourite detective is Bayek of Siwa, as he has to reveal many misteries and catch the bad guys.

Frindis: That would have to be Gabriel Knight. Honorable mention to his assistant & later investigator Miss Grace Nakimura.

Boingo420x: I was pondering how to answer this question as I'm not really into detective games until I read your post. Yes! Nick Valentine was totally cool and my favorite character in the game. If memory serves, I had him as a companion throughout most of the game.

Sarafan: My favorite detective is Raymond Maarloeve from The Witcher 1. A very interesting person which helps Geralt in the investigation of the Salamandra case. The quest chain that involves Maarloeve is one of the best in the whole Witcher series. It also brings a big surprise in the end. I won't spoil it here, you have to see this by yourself!