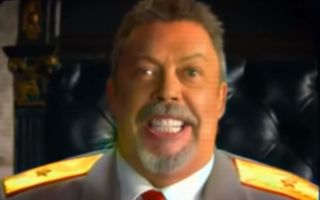 Warcraft 3: Reforged is coming out this month and Age of Empires 4 may be due this year (fingers crossed). Remastered versions of Command & Conquer: Tiberian Dawn and Red Alert are both in the works, and so is Homeworld 3—although that one's not due until 2022. Several significant RTS series are about to be revived, but there are plenty more still dormant.

What about a new Supreme Commander, Kohan, Halo Wars, or StarCraft? One more chance for Dawn of War? A sequel to Stalin vs. Martians? OK, nobody was crying out for that last one. What do you think: Which RTS series deserves a comeback? Here are our answers, plus a few sourced from our forum.

Andy Kelly: Westwood's Dune 2 is arguably one of the most influential real-time strategy games ever, and I think it's about time we returned to Arrakis for more base building, sandworm evasion, and spice harvesting. Blade Runner 2049 director Denis Villeneuve has a new Dune film in the works, which I am wildly excited about, so maybe this imaginary game could be based on his vision of Frank Herbert's universe. But I'd take any version of Dune, whether it's the books or (and this would never happen) David Lynch's mind-bending film. Dune 2 arguably paved the way for Command & Conquer, and I would love to see another RTS based among those endless, sweeping dunes. The spice must flow.

Wes Fenlon: Empire at War wasn't a great strategy game, when you hold it up to the likes of Starcraft or Command & Conquer or Total War. But it was a great Star Wars game, and that counts for a lot. It really captured the fun of lording over a Star Wars space battle, sending groups of X-Wings on runs against the individual turbolasers on a Star Destroyer or bringing an entire fleet to bear against a space station. The broader strategy stuff was pretty fun, too, a simple but effective galaxy management sim that managed to be deep enough to stay engaging. Planetary ground battles were a bit crap, which is something a reboot could probably do far better. Empire at War is beloved enough to still have a major mod project in development, so I think the audience would be there for a new game built on 2020 technology.

PS: Andy, if someone was going to make a new Dune game, I say it should be based on Jodorowsky's Dune. Now that would be wild.

Robin Valentine: On a remote island, Dr Moreau-esque scientists go to war with genetically modified animal hybrids. That premise is just too brilliantly goofy to lay dormant. The actual gameplay was pretty clunky as far as I remember, but there was a real magic to designing your own custom units by combining animals from your library of DNA, and it added a huge amount of variety to the strategy. Ambush your opponent with a squad of chameleon-zebras, rule the waves with a swarm of shark-porcupines, and leap into battle with your elite kangaroo-tigers. Who wouldn't want to see that with modern graphics and polish?

Tom Senior: This was a really slick experiment that aimed to create an RTS without base building. Instead you would pour regenerating requisition points into summoning units to the battlefield in spawn points you've captured. With each wave of reinforcements you could choose to bring in infantry, artillery or air support to deal with the tactical situation at hand. It looked great, and had a surprisingly good singleplayer campaign full of vivid characters. Also, it had incredible, gorgeous, terrifying nukes that could come into play during the endgame.

There was an ambitious multiplayer mode that let players take charge of individual units, working in harmony to balance a force correctly in the eternal rock-paper-scissors contest between infantry, air support, and tanks.

Jody Macgregor: Warlords was a classic series of turn-based strategy games that dated back to 1990. In the early 2000s they gave birth to a real-time spinoff called Warlords Battlecry, which focused on heroes with RPG leveling and stats as the leaders of your armies. Other RTS games came around to similar ideas, but the Battlecry games did it right first time. It really felt like having a badass RPG character at the forefront of your force. Battlecry 3 came out in 2004 and the series hasn't been heard from since, but I'd love for it to get one more shot.

From our forum members

neogunhero: A friend and I have always thought that a new Age of Mythology game would be awesome. The concept is so cool, and given todays technology, a new entry would be amazing.

spvtnik1: C&C is getting their comeback, and I'm thrilled. But I'd love to see the C&C:Generals series revisited. Army Men could use a comeback, but there are some other more modern titles in the same vein. Dune... we're getting a new film soon, so why not? I've dabbled, but I think I would get the most out of a modern RTS. Something like Anno where you can win by diplomacy or by brute force.

Johnway: World in Conflict is probably my top one. Its one of the few RTS games that i ACTUALLY enjoyed. It did away with the base building, research or tedious resource gathering as it slowly ticked along naturally. Just me with the strategy gaming without the need to memorize a ton of buttons that irked me in other strategy games. Additionally the missions were reasonably bite sized too, taking less than an hour to complete even the later missions. Compared to other RTS games missions later on would take me several hours of slowly grinding down the enemy usually by building a load of siege units. Throw in a well delivered story and missions sort of had a narrative progression besides "kill everything to win" it was capture this, hold that, rescue general etc. Plus it felt like you were part of a bigger battle with AI fighting elsewhere on the map.

grendel: The most worthy RTS for a resurrection slot would have to be Bungie's two MYTH: THE FALLEN LORDS games. Cel-animated cartoon cutscenes, a darker storyline than Robert Jordan's The Wheel of Time yet not as rapey as Game of Thrones (actually, the storyline was fairly transparently lifted from Glen Cook's "Godfather of all Grimdark Genre" novels about the Black Company).

But what I loved most about it (aside from the Grenadier Dwarves who, it should be noted, care not for aiming their grenades and are not a reliable troop) was that there was NO BASE BUILDING. You had your straggling, harried troops, you had your level objectives, and the enemy was out there somewhere in great numbers closing in. So it didn't have the deeply layered strategy of say, Sins of a Solar Empire or even C & C, but you could jump right in and there were always multiple solutions to winning, or at least surviving, any given level. MYTH was released with an open engine for modding, and the MYTH 2 Gold edition (or whatever they called it) came with some of the best mods ready to play, and having just gone back and checked, I'm astounded at how large some of them are in comparison to the base game. Kind of like what I've found with the mods available for Shadowrun--Dragonfall.

But yeah, no base building. Ain't got no time to watch goblins chop wood.

Las Vegas: Supreme Commander! With more complexity such as research and designing custom experimental weapons. Online bases that consume whole planets and wars that can last days or weeks! Battles that are not necessarily fought over your main base but a location that has something that the ensuing parties want (resources, a new planet to colonize, etc). Finding another players base should be a long arduous task. Many more options available but I'm not getting paid.