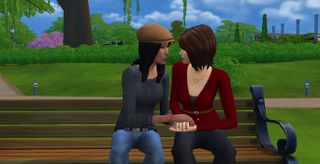 The option to have same-sex relationships in The Sims was a controversial decision that almost didn't make it into the final game.

Though The Sims was meant to be a deep simulation of everyday domestic life, some developers at Maxis feared that controversy might give EA a reason to cancel The Sims outright. As explained in this excellent interview with programmer Patrick J. Barrett III, same-sex romance was initially included because of a managerial oversight. Now, thanks to some recently released design documents from programmer Don Hopkins, we have a new perspective on what was happening behind the scenes.

The Sims is a beloved series today, but before the release of the first game it was seen as a doomed experiment that EA was eager to sweep under the rug. After many tumultuous years spent in development, its own design team was convinced that EA was looking for a reason to kill the project and protect the SimCity name from being tarnished. "No other game had facilitated same-sex relationships before—at least, to this extent—and some people figured that maybe we weren’t the ideal ones to be first, as this was a game that EA really didn’t want to begin with," Barrett said at the time. "It felt to me like a fear thing."

As notes in Don Hopkins' design documents explain, the first version of the romance system only allowed for interactions between heterosexual sims—something he took great issue with. If a player tried to initiate a romance with a sim of the same sex, that sim would slap the one the player was controlling. "The whole relationship design and implementation (I’ve looked at the tree code) is Heterosexist and Monosexist," Hopkins wrote. "The code tests to see if the sex of the people trying to romantically interact is the same, and if so, the result is a somewhat violent negative interaction, clearly homophobic. We are definitely going to get flack for that."

Below: The tree code Hopkins mentions, which shows how sexual advances by sims of the same sex are automatically refused.

Hopkins proposed a solution wherein sims each had two separate values that determined their attraction to sims of the opposite sex and sims of the same sex. That way, it would also be possible to model bisexual and nonsexual sims. "It would make for a much more interesting and realistic game, partially influenced by random factors," Hopkins wrote, before adding, "and anyone offended by that needs to grow up and get a life, and hopefully our game will help them in that quest. Anyone who is afraid that it might offend the sensibilities of other people (but of course not themselves) is clearly homophobic by proxy but doesn’t realize it since they’re projecting their homophobia onto other people."

The design of The Sims' romance system was still undecided when Barrett was hired in October of 1998 and given the job of programming social interactions between sims. Supplied with an outdated design document and unaware of the ongoing debate over non-heterosexual romance, Barrett went ahead and added his own solution for modelling gay relationships anyway.

His version didn't use two separate values like Hopkins' proposed solution but instead let sims have homosexual interactions as long as their relationship score was high enough regardless of sexual orientation. Barrett's code for homosexual romance stayed in the game—much to the approval of Will Wright, who originally advocated for its inclusion. With bigger fears about EA cancelling the project looming, everyone moved on to more pressing matters. The Sims' homosexual romance options were forgotten until that fateful day at E3 in 1999 when, before members of the press, two women sims started making out during a live demo. That single moment propelled The Sims from a shameful underdog to one of the biggest games of E3 that year.

Above: An internal, pre-release demo of The Sims in 1998.

After all that publicity, Barrett says the team created a system to identify a sim's sexual orientation based on user-directed actions. "The system worked so well that the same-sex support was invisible and seamless," Barrett told the New Yorker. "It is rare that something works exactly as you intend it to. A lot of my other simulations in the game fell apart. This one worked perfectly. Once the team saw it in action, they decided I could keep same-sex support, and the topic didn’t come up again."

Though that fateful E3 kiss is a story well-known by now, Don Hopkins' perspective on the flaws of the original romance system adds some much-needed clarity. If you're interested in learning more about The Sims development, Hopkins has also tweeted out some cool tidbits of information, including a pre-release demo video.

Hopkins' design documents also have some other fun bits of trivia, like proposing that the garbled language sims speak should actually replicate the way adults talk in Charlie Brown or use a lesser-known language like Navajo, Urdu, or esperanto.