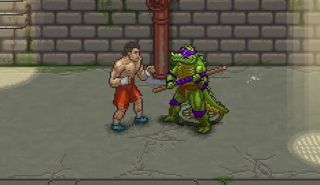 We told you yesterday about Punch Club, a boxing tycoon sim/RPG that Lazy Bear Games and publisher tinyBuild promised to release ahead of its scheduled January 25 launch date if the Twitch hivemind could manage to finish it on stream. “Twitch will most likely beat the game sometime within the next week, so you haven't got long to wait!” the studio wrote yesterday on Steam. And technically, that statement was accurate. But I'm pretty sure that "mid-afternoon tomorrow" isn't quite what anyone had in mind.

TinyBuild sounded legitimately surprised when it sent out a second announcement yesterday, just a few hours after the first, saying that Twitch had already managed to get through nearly 60 percent of the game. “What's remarkable is now organized the Twitch chat is playing Punch Club,” CEO Alex Nichiporchik said. “They're playing at the speed of an average player, which caught us by complete surprise. They are using all of the advanced tactics a normal player would, researching skill trees and figuring out what works for specific fights.”

And unlike "people," the Twitch collective doesn't need to eat, sleep, or catch up on The Expanse, and so it was able to power through the entire thing in a mere 36 hours. More than 70,000 people took part in what tinyBuild said was “probably the most organized Twitch Plays event so far," with a “steady thousand” playing at any given time.

The launch announcement included a brief breakdown of Twitch's adventures in Punch Club, which I took as a joke until I checked Steam and saw basically the same story, preceded by a spoiler warning. It's fairly minor as spoilers go, though, and I think it does a good job of summing up the true nature of the game. So, with fair warning, this is how Twitch found fame, fortune, and justice over 167 days in Punch Club:

“Within those 36 hours, Twitch got a girlfriend, and made some bad decisions along the way that made them end up in prison. From there, they proceeded to sell uranium and take drugs to rank up in the Prison Leagues and make their way back to freedom.”

Well done, folks. Punch Club, as promised, is out now on Steam.