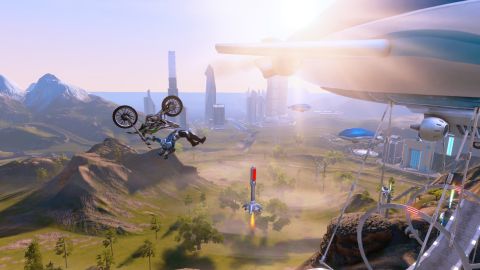 Fusion's thrill isn't in leaping a yawning chasm as a jet screams below, but in simply clearing an overhanging ledge.

Trials Fusion has one of the most brutally honest trailers of all time. Ignore the early dubstep-fuelled montages of rad dudes doing cool stuff, because that's only part of the game. Mostly, you'll be biting it hard.

The trailer, called 'Competition', presents an ignoble reel of crashes, spills and tumbles. After each wipe out, the player's name plummets down a leaderboard. It captures the spirit of a game devious enough to continuously knock you on your backside, but compelling enough to make you rise to your feet.

A physics lesson on two wheels. That's Trials Fusion. It's about friction, momentum, gravity. There's no bunny hop button in real life and there's none here. To jump, you'll need to distribute weight accordingly, rocking back on your bike then snapping forwards with purpose. You can lean back to wheelie, break hard to endo, rotate in the air and land hard on squishy suspension. Despite a basic control scheme where the only options are go faster, go slower, and nudge your body around a bit, you're surprisingly versatile. Unconstrained by specific commands, you find your own methods of movement in between the buttons.

That's the reason those dubstep-fuelled montages of rad dudes doing cool stuff are better to watch than play—because essentially all they're doing is holding down accelerate and letting the course do the work. It's fun but hardly challenging. Trials Fusion is best when you're making slow progress.

When restarts number in the hundreds and each checkpoint attained feels like a victory. When you're nervously ascending an almost vertical incline or bunny-hopping between platforms narrower than a handlebar. Losing by a millisecond to your ghost (who actually races alongside you), then restarting the course to shave off two. That's Trials Fusion. The other stuff—the sleek cityscapes, the gorgeous new lighting and weather effects, the sheer amount of background noise—though impressive, feels almost distracting.

Fusion, like its predecessors, almost qualifies as two different games. While the punishing second half deals in piecemeal progress, the first is all about big air, monster tricks and constant forward motion. The philosophy is the same as before but the scale is unprecedented. There are grand urban sprawls where shiny spaceships docking in the background and cars whizz down roads. There are dense stormy jungles and African savannas bathed in dreamy orange sunlight.

You almost want to ask developers RedLynx: "Why?" On the Marina Mania level, for instance, there's a suspension bridge miles into the distance, and on it cars pass back and forth. Someone not only had to model those cars, but give them AI routines and tiny headlights, all for a piece of scenery you might not even notice in a game set entirely on a 2D plane. Across eight worlds featuring eight courses apiece, you get the sense RedLynx loved every second of creation. They did these things because they could.

To their credit, these are tracks designed to be replayed dozens of times. There are warp points to find—wormholes you can travel through to visit an extra hard portion of the course—and secret squirrels to acquire. Because squirrels. Deepest are challenges, and there are three on each course. 'Completing 2 flips', 'performing an endo for 30m', or 'finishing a faultless run' add an extra dynamic to merely completing levels without bailing.

They're specific to each course, too. So on Stormtrooper you must dunk all the penguins underwater. On Deep Freeze you'll get points for climbing a flag pole. Complete them for points to buy bike parts (shuriken wheels and bladed bodykits, for example) and rider attire drawing inspiration from Mad Max, Evel Knievel, and demon clowns.

Challenges give tracks a new layer, and stunts have the same effect on driving. At any point in the air you can manipulate the right stick and contort your ragdoll rider into all manner of ungainly positions, almost like lockpicking in Thief or Skyrim. That is to say, you're just wiggling the stick at a bunch of acute angles until something cool happens.

Tricks don't net you points, unless we're talking about the FMX mode where only cool tricks assure a top finish. If anything they're more like some great temptation, making the fight not only between you and the course, but your own ego. Sure, you could do the job quickly, or you could do it right .

When you've finally finished the courses, the challenges, the secrets, and the skill games, there's a whole other side to Fusion—creating stuff for others to do the same. While the game isn't yet in the magic fingers of the community, you can cast an eye to the predecessors for over 700,000 ideas of what to expect: first-person shooters, Angry Bird clones, bank heists, Endor chases, sub-ocean explorations, Mirror's Edge tributes, and even fully working versions of Asteroids.

The track editor builds on what came before. While little of note has been introduced, little needed to be. The setting is more varied, for instance, and now contains snow and desert areas, but when people can literally make Limbo inside of it, these additions seem a bit pointless. Browsing them is simple though, with players able to search for hard tracks, RedLynx picks, top-rated weekly, and more.

It's one thing making something for your friend to play on, but it's another thing actually playing them. Multplayer here harkens back to the days of Excitebike, with up to four players simultaneously racing across a selection of specially-made supercross courses (courses featuring four lanes rather than one). Though, the fact it's local-only multiplayer is limiting.

If it wasn't clear from the booming electronic menu music with its “Welcome to the future!” chorus, the collection of astoundingly detailed tracks, and a primed and ready-to-go method of letting players create and share tracks, Trials Fusion is a big game. It's a bona fide platform. While this is all good, it's not the best part of Trials Fusion. The best part, like in a touching sports movie, was in it all along. It's in the tumbles and spills. The acute motion rather than the massive gesture. That's Trials Fusion.

Fusion's thrill isn't in leaping a yawning chasm as a jet screams below, but in simply clearing an overhanging ledge.