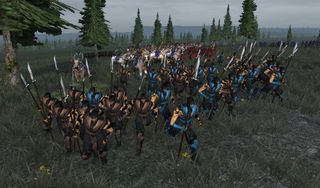 The Mortal Kombat universe, now that I'm forced to think about it, is a surprisingly fertile setting for some Total War. You've got memorable factions with lots of distinct traits, constantly shifting allegiances and several realms where the most popular occupation seems to be 'martial artist'. Mortal Kombat Konquest TW should fit right in.

It's a Mortal Kombat overhaul mod for Medieval 2, from modder Kirukato. They posted some work-in-progress videos last year and this month announced plans for it, along with some new screenshots.

Here's what Kirukato has planned:

They're working on it along, but if you've got ideas or want to collaborate, give them a holler.