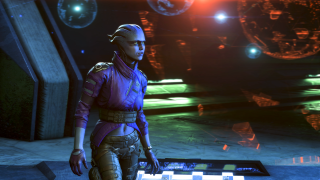 Sex in games is no longer a rarity, with even blockbuster releases offering everything from soft-core screwing in space to making (surely uncomfortable?) love atop a stuffed unicorn. It's also not yet a perfected art. But while the act is still a minefield of potentially mood-dampening clipping errors, the foreplay of games has never been better. Thanks to this, sex in games has finally become, well, sexy.

That's the theory at least, although in practice things don't always work out as planned. Soon after booting up Mass Effect: Andromeda for the first time, I confidently walked my character, Sarah, up to Gil, the cheeky Chief Engineer of the Tempest. I picked the romance option and—to my horror—awkwardly blurted out, "So, what can a girl do to get her flirt on around here?"

Gil looked aghast. Sitting at home I was mortified. This was the opposite of sexy.

Gil, whom I can only imagine was flabbergasted by my pick-up attempt, kindly explained that not only was he not interested in me, but that he was gay. Mortified by my actions, I would play a good two thirds of the rest of the game without even winking at another character.

In the end, desperate for companionship and quickly running out of options, I turned to Suvi, the Science Officer. We'd flirted once or twice earlier in the game without too much cringe. Surely she would be a good choice for a late game sex-against-the-stars spectacular? Sadly, no. Turns out I'd left it too late and none of the flirt options were available anymore.

I'd managed to play an entire Bioware game without even a single kiss.

What's love got to do with it?

My limp experience in Andromeda shouldn't have surprised me, as sex in big-budget games has always been… awkward. In a genre known for ground-breaking graphic realism, marvellously mo-capped animation and top-tier voice acting, you'd be forgiven for expecting the sex to also be up to par. Yet what players have often experienced when getting their shag on in the last decade was something closer to '80s Cronenberg body-horror than anything even mildly titillating.

In The Witcher 3, all women orgasm the same. It might be a Geralt thing—who knows—but for anyone who has hooked up with multiple people within CD Project Red's epic RPG, it's slightly unnerving to see the exact same animations used in every sexual encounter. Geralt's introductions may be different, and the settings can vary wildly, but within a few short thrusts, the result is like clockwork.

In Fallout 4 there was no sex—well, none animated at least. Instead you talk to your companions, steadily building a rapport before being rewarded with a stat buff when you sleep near your loved one, which is often accompanied by a verbal implication of sex the night before. Things get really interesting when Fallout's rustic open-planned living aesthetic mixes with having multiple companions in one room, causing you to wake up in to a veritable chorus of voices all chiming in at once as they all start telling you how great last night was.

Some big-budget games do sex well, but again, the focus of most of these successful couplings was often the prelude rather than the actual bump and grind. Meanwhile, indie releases soared in the last decade, exploring a more diverse range of sexual topics. Outside of the overly realist expectations of blockbuster releases, sex became more intimate, and more about intimacy.

Some of the most tender and believable sex and sexuality occurred without animation at all, and exists in beautifully crafted text-based games like Queers in Love at the End of the World and A Bunny & Her Mistress. Here, sex is personal, heartfelt, and delicious. Its only text, yet both games create entire worlds with just a few words; moments full of desire and love, as well as pleasure and pain, moments that linger on the mind of the player long after the game is done.

In my mind, some of the best sex in games of the last ten years came from developers such as Nina Freeman, Anna Anthropy and Robert Yang. Each told all-too-familiar stories of messy love: of unmet expectations and end-of-the-world promises, internet hook-ups and badly framed dick pics. By doing so, they shed light on the reality of sex today, thereby making it all the more believable.

Better than you could have imagined

In the end, the best sex in games in the last decade didn't actually happen. And I don't mean that in a philosophical way. I mean that it literally doesn't occur in the game.

You wouldn't be remiss for not expecting much sex out of 2016's Firewatch. You play as Henry, a temporary lookout in Shoshone National Park, a near-broken man trying to escape his existence as a husband losing his wife to early-onset dementia. Yet, after several months alone in the forest, and with only walkie-talkie for communication, a chemistry builds up between Henry and his neighbouring lookout, Delilah.

The sexual tension between Henry and Delilah is palpable in a scene from Day 76, when—as they jointly watch a fire blaze in the park—the pair share a drink, compare bad tequila experiences, and confess their sexual desire and longing for each other. It's not convenient. It's not smart or wise. And Henry is, of course, still married. Yet the need felt between the two is so intense it feels heavy. It's the writing and vocal work that really make these scenes shine, creating what feels like an authentic example of unrequited lust, that itch you can never scratch.

When the two characters paths do finally collide and Delilah leaves without a word, we, just like Henry, are left with only the fantasy, the daydream of what could have been. It's brutal, honest, and realistic.

Sex isn't always inevitable, and shouldn't be expected. It's not something to be won, and it's not all instant orgasms and saxophone solos. Sometimes it's messy, and sometimes it's awkward, yet, just like the last ten years have shown, sometimes it can really surprise you.