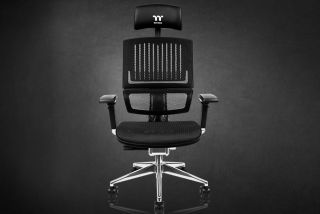 There are two types of people in this world—those who love gaming chairs, and those who would like to buy them all only to pile them up and light 'em on fire. If you fall into the latter category, you might find Thermaltake's CyberChair E500 more to your liking (for sitting, not burning).

Thermaltake announced the new "ergonomic and durable gaming chair" at CES. From the pictures I've seen, it looks nothing like Secretlab's Omega or Vertagear's SL5000, two models that occupy our roundup of the best gaming chairs, or any of the many others built in same the overall style. Whether it's actually more comfortable, I can't say, because I haven't sat in one yet.

It looks promising, though. While marketed as a gaming chair, at a glance, it looks like a cross between Herman Miller's Aerion and Celle office chairs, both of which run north of $1,000. The CyberChair E500 won't cost quite as much, but will still be relatively expensive—I'm told it will retail for $599.99.

Details are limited, though Thermaltake says the chair is built on an aluminum frame with a "highly breathable" permeable mesh cushion.

"The CyberChair E500 offers a full range of adjustments including headrest, seat depth, height adjustment, and wire-control mechanism with multi lockable positions to reach maximum comfort. Furthermore, users are able to relax and immerse the body with up to 117 degrees of back angle inclination," Thermaltake explains.

Multiple direction armrests allow for making height and width adjustments. There's also a cushioned headrest that protrudes from the top, though it's not clear how adjustable it is (it looks like it can at least go up and down a bit), or if it can be quickly removed without the use of tools.