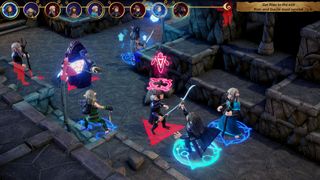 The Dark Crystal: Age of Resistance Tactics is due to release on February 4, bringing the grim-and-whimsical world of the original movie and the Netflix series to life on your PC. In the game, you lead the Gelfling resistance to unite the clans against the calamitous ker-kawing of the evil Skeksis through “50 unique turn-based tactics RPG battles.” It’s all very Fire Emblem or Final Fantasy Tactics looking, as you assign Gelflings “jobs” to get them new abilities and access to new equipment. The characters include some from the original film, and some from the Netflix series. The Dark Crystal: Age of Resistance Tactics is developed by BonusXP and published by En Masse Entertainment. It was originally announced for last year, but got pushed back to this year.

The Dark Crystal and tactics games might seem like an odd combo, but after the tactics game starring Mario and the Rabbids was a hit I’m ready to try anything. You can find The Dark Crystal: Age of Resistance Tactics on Steam, on GOG, and on the En Masse launcher for $19.99 or £15.49, or perhaps even A$28.95—dare I say CDN$22.79? I do.