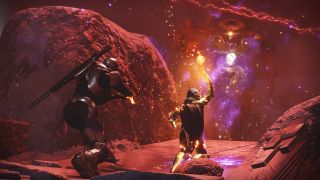 Dataminers have discovered key details on Destiny's next big seasonal update. The new season will arrive on March 9, seemingly under the 'Season of the Worthy' moniker. In addition to some new community events, it sounds like Season 10 will bring back Destiny's hardcore PvP mode, Trials of Osiris, as has been heavily hinted.

The road to Trials should start next week with the arrival of the Empyrean Foundation event. According to a datamined description, the Empyrean Foundation kicks off with an activity called 'Worthy', which asks players to "provide tremendous support toward the Restoration effort and rekindle the Lighthouse to usher in a new age of Guardians."

Destiny fans will be familiar with the Lighthouse—a special Destiny 1 location on Mercury that was only available to Trials winners. Bungie are set to reveal more specifics about the Empyrean Foundation event in tomorrow's This Week at Bungie blog update, though we know that players will have to continue to "Donate Polarized Fractaline to the Tower Obelisk" to gain access to the mission. Expect it to cost 5K of your precious Fractaline, based on the related in-game triumph—so a little bit of a grind there, then.

Seasoned Destiny dataminer Ginsor confirmed the long-rumoured return of Trials "and more" in a tweet. Dataminers have also discovered a few references to the next Crimson Days Valentine's event, which reference a couple of new Sparrows and weekly bounties that reward delicious confectionery hearts.

It has been a busy week for Bungie. The latest update had to be rolled back after it deleted a lot of players' glimmer, rare materials and even in some cases the Silver in-game currency that's paid for with actual money.

In another "oops" moment, the front page of Twitch accidentally revealed that some exotic Destiny awards will be awarded as part of a Twitch Prime subscription. We'll have to wait for the official, proper announcement to see which items will be included in the promotion. Meanwhile, enjoy a roundup of the news in video form from Houndish below, and catch up with our thoughts on the pros and cons of Destiny's new seasonal update model.