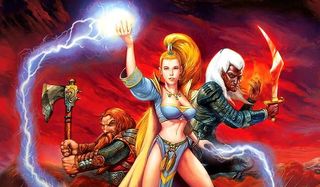 EverQuest turns 20 this weekend and I turned 27 last weekend, so you can do the math to figure out what I might have been doing in 1999 when it launched (I wasn't quite old enough to become obsessed with MMOs just yet). EverQuest occupies a dusty space in my consciousness alongside pagers and denim vests—I remember them, but they fell out of use before I had a fully-functioning brain.

To bridge the gap between me and one of the longest-living MMOs, to find out what people thought of the game way back when, I’ve turned to one the most reliable sources of information on videogames there is: Academic papers! These never age poorly at all. The runaway success of massively multiplayer online games (because acronyms were still working their way into the collective lexicon) was a topic ripe for discussion amongst our fellow nerds in the early 2000s.

Before Second Life dominated the general public's wide-eyed curiosity about virtual worlds, researchers and critics had a lot to say about EverQuest.

One of the first numbers proudly cited in every paper is EverQuest’s total subscribers, numerical proof that the game’s cultural relevance was worthy of research. What numbers were impressive in the early 2000s, you ask?

Lisbeth Klastrup’s “A Poetics of Virtual Worlds” paints a picture of the 2000s in which EverQuest and other MMOs would eventually become as ubiquitous as Myspace.

“As more and more people gain cheap access to the world wide web and services become easier to use, we should hence expect a massive growth in the number of people using these worlds; they are no longer marginal cultural phenomena, but are about to enter the scene of the everyday life of many inhabitants of the 21st century.”

“Is Electronic Community an Addictive Substance?” by Dr. Richard Smith and Florence Chee reference the incredible number of EverQuest monthly subscribers and daily users circa 2003. I’m pretty sure an average department store in 2001 had more daily visitors, but that’s fine.

“Sony Online Entertainment’s EverQuest (EQ), is one of the most popular massively multiplayer online role-playing games (MMORPG) ever to hit the online game market, with a subscriber base of more than 430,000 gamers.  At any one point, around 2000 players per server are going about their daily business online. Sony currently supports 41 EverQuest servers and each server runs an independent version of Norrath, which is the EverQuest world.”

By contrast, “The EverQuest Speech Community” by Susana Tosca references a much higher number of peak daily users despite being published in 2002. Because quibbling over server populations isn’t new, folks.

“Claiming 98,000 simultaneous online users in peak hours and a monthly $4,000.000 earning on subscription fees from its 400.000 players, EverQuest is still one of the giants on the English-speaking MassMOG (massive multiplayer online games) arena.”

After verifying its legitimacy as a social phenomenon, the next course of action is for a researcher to begin inserting themselves into the EverQuest community to gather information and observe the locals. Some were newcomers to the game. Others...not as much.

In “The Sopranos Meets EverQuest” by T.L. Taylor and Mikael Jakobsson, two researchers prove that you don’t have to leave your partnership on campus. Thank goodness Taylor was willing to be a mentor IG and IRL.

“While Mikael was completely new to EQ at the beginning of this study, T.L. was already a chastened veteran, having played the game for several years. Upon first meeting inside the game T.L. started out by handing over some items that greatly improved Mikael’s abilities to kill creatures, as well as a sum of money that was very substantial compared to what he was able to make at that level. This conduct is known as twinking but when Mikael worried that others might perceive him as a cheater, T.L. assured him that he only had been mildly twinked compared to many other newbies.”

Tosca wrestles with the in-game manual which apparently gave this helpful advice: “In general, the language in EverQuest is Elizabethan in nature. Just throw in a few ‘thees’ and ‘thous’, and life is good.” Being a linguist in an MMO probably hasn’t gotten any easier than that. Sorry, Tosca.

“Of course Elizabethan English is much more than just “throwing in a few thees and thous”, which are consistently badly used anyway, and unlike this guide might lead us to expect, real attempts at Elizabethan are not particularly well received by players. I made the experiment of using real Elizabethan (as taken from websites like the Elizabethan English guide which contains a wonderful list of combinatory insults), taking the following examples literally from the website into the game, to be met with annoyed questions and mostly silence.

For their paper, Dr. Smith sent research assistant Chee in as the test subject. By the end of the paper, they’re staunchly defending EverQuest’s place in polite society. We know how MMOs go, so it’s safe to assume that Chee is still playing EverQuest full-time all these years later.

“EverQuest should not be labelled as an addictive substance because if we were to do that, then we would most likely need to label everything potentially likeable as addictive... We believe EQ is a very attractive community of which to be a part. We were curious to see if the researcher’s participation in the game would have adverse effects similar to that of other reported worst-case scenarios. We can safely say that aside from a few nights of staying up late to group or chat, there was no harm done.”

Whalen Rozelle, then Stanford student, lists his two years as an EverQuest player in the citation section of “EverQuest: An Equation for Addiction”. I’m not going to make a joke about that. Just accept that it’s true.

“Author experience.  Having played EverQuest for over two years, I have experienced many events that are representative of opinions and ideas in this paper.”

Klastrup faithfully transcribes a conversation between players that she witnessed while playing with no sordid details spared.

Academics vs. the times

Possibly most telling are the signs of the times that academics of the day felt worth calling out: Everything from innovative uses of their current technology to the demographics of gamers.

Taylor and Jakobsson use their encounter with “a lizard named Phrank” as an example of player reputation, but actually just end up reminding me of the desperate lengths we used to go to in order to cheat. ALT+F4 is a lot easier than screaming at your mother to pull the plug on the household landline.

“Instead of handing over the earring Phrank went linkdead. Linkdeath occurs when a player loses his network connection and therefore gets logged out of the system. In this case, however, we all immediately suspected that Phrank had typed the /quit command or simply pulled the modem cord from his computer and that he would not come back and hand over his ill-gotten loot.”

Jakobsson also highlights the surprising demographic spread of players in EverQuest. Women played video games in 1999! Wow, how quaint to be surprised by that. I’m glad we know this definitely now and never argue about it on the internet anymore.

“While there is still far too little demographic information about who is playing this genre, initial studies are indicating that it is not simply the stereotyped gamer (adolescent and male) but actually a broader segment of the population playing. Women are purported to make up 20-30% of the player base for these games and the average age seems to be in the mid to upper 20s.”

If we could stop talking about ray-tracing for like 5 minutes in 2019 and appreciate the fact that Rozelle was having more or less the same conversations about GPUs back in the day, that would be great.

“Another area of MMORPGs that EverQuest revolutionized is graphics and technology.  Although 3-dimensional (3d) first person shooters had already established themselves as commonplace in the game market, there were no MMORPGs that were 3d until EverQuest’s release. Verant and Sony Online Entertainment took a chance at releasing a game that required a 3d accelerator card, something certainly not in every home in America at the time, but with the overwhelmingly positive reaction to the graphics, it was a successful gamble.”

I know that MMO weddings are about as hip as pumpkin spice lattes now, but back in 1999 they were a novelty. Smith and Chee reference an anecdote of one of their interview participants who apparently couldn’t even manage to show up on time while sitting at his own desk.

“James shared an anecdotal experience of a wedding he attended in Norrath.  The ceremony took place on one of the most beautiful white bridges of Norrath, located in North Karana. Numerous players attended the ceremony and James got there by paying someone 200 platinum pieces to port him there because he was late.  He described the scene to be like what would find in a medieval movie, with beer, duels, and much jubilation.”

Here are some gems from the citation pages of the 2000’s EverQuest academia craze. You’re welcome.

I’m sad to report that Club Fu’s guild website is no longer active but here it is in its 2003 glory. Mind the NSFW gallery page.