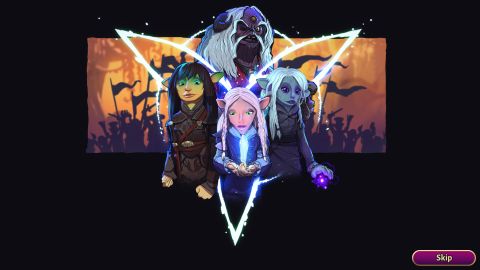 This Netflix tie-in is an awkward adaptation, but a surprisingly smart strategy game.

I love strategy games, and I love The Dark Crystal, but heading into this adaptation of the Netflix TV series, I was pretty skeptical of the idea of squishing the two together. It’s a pleasure to report, then, that while Age of Resistance Tactics never fully justifies the combination, it’s a far richer and more substantial game than I expected.

For those unfamiliar, the show (itself spun out from a 1982 cult movie) takes place in a strange fantasy world, represented primarily through puppetry and animatronics, where the small and peaceful Gelflings are oppressed by the screeching, parasitic Skeksis. The game loosely retells this story, with a few new diversions of its own, though in a way jumbled and fleeting enough that anyone who hasn’t watched the series will be utterly lost from start to finish.

With too little explanation for the uninitiated, and not enough new elements to please any fan looking for significant additions to the canon, the storytelling largely falls flat. But where the game shines is in its action.

As you progress across the campaign map, you put together parties of heroes—from a stuffed roster of characters from the show and new additions—to fight in turn-based battles. Thanks to clear presentation, a simple interface, and a generous undo button, the strategy is pleasingly accessible, while still complex enough to sustain its surprisingly chunky 20 hour runtime.

There are hints of Through the Breach in its mission design (calm down, just hints), with careful positioning and maneuvering key to success. Attacking from above your opponent confers an attack bonus, encouraging you to fight for the high ground. Environmental hazards, such as poison swamps and pits of snapping Gobbles, damage anyone who stops in them—movement and pushing abilities allow you to line up foes and shove them into these dangers, though it’s vital to not leave your soldiers vulnerable to the same trick.

Stages get cleverer and more elaborate as you go, showing off a real flair for strategy design. On coastal islands you have to keep an eye on the tide, which may rise to drown hapless fighters, or lower to expose new routes; in the dungeons of the Skeksis, your party is at one point divided along two routes, each having to find and hit levers that open doors for the other; and in the Grottan caves, a stage challenges you to line up boulders and whack them into burrows to stem a tide of enemy beasts, like a giant game of Gelfling snooker.

Helping you adapt to each challenge is a surprisingly extensive customisation system for your characters. A JRPG-esque ‘jobs’ system, reminiscent of Final Fantasy or Dragon’s Dogma, allows heroes to effectively switch classes at will, levelling up each discipline individually. Abilities gained in a class can be used as secondary powers in another, allowing you to create your own hybrid classes, and by reaching certain requirements you’re able to unlock advanced tier 2 and 3 jobs. Combinations range from as simple as paladin/thief, to as esoteric as chef/beast tamer.

Though levelling slows as the total experience of a character rises, you’re otherwise never punished for a bad choice—you’re free to reshuffle jobs and abilities whenever you like. But oddly you’re not bound by canon either. While characters have certain natural inclinations, there’s nothing stopping you from, for example, turning peaceful nature-lover Deet into a ruthless assassin, or hero of the resistance Rian into a bookish scholar. Whether that’s a bit of goofy fun, or utter sacrilege, will depend on your inclinations as a fan.

As you take the time to play around with your roster, interesting combos reveal themselves. Lots of abilities can only be used when certain buffs or debuffs provided by other classes are in place, rewarding you for clever synergies. Targets marked by your scout, for example, become easy prey for your slow-but-powerful soldier, while a song-teller’s easy deployment of multiple buffs at once allows musicians to more reliably pull off their powerful ‘ultimate solo’. There are loads of combinations to try, with randomly generated ‘events’ missions serving as easy testing grounds to find your own, as well as to grind out more level ups.

There’s a kind of toybox fun to collecting the show’s heroes, dressing them up as I like, and making them battle for my entertainment. But they do kind of feel like toys, lacking the physicality and life of their on-screen puppet counterparts. Partly that’s down to the limitations of the medium. A behind-the-scenes documentary on the show reveals the original plan was to make it entirely with CGI, but the creators soon realised the character designs simply don’t work as anything other than puppets. In some ways the game wrestles with the same problem. But it’s also a symptom of a clearly humble budget, the game trying to breathe life into the bustling world of Thra with a highly limited selection of animations and character models.

Equally, while the strategy combat is good fun throughout, its relationship to the source material is variable to say the least. A fight against the Chamberlain evokes the show nicely, as he uses honeyed words to distract and confuse your heroes, even converting them to his side if you don’t get to them in time. But representing Brea’s search for knowledge as a brutal skirmish against a squad of librarians where you have to whack giant floating books to collect them is awkward at best. Enjoyable as the battles can be, it was rare for an hour to go by without something in the game reminding me that this simply isn’t the ideal genre for a Dark Crystal adaption.

It’s testament, then, to the game’s strategy chops that it’s a good time regardless. It’s not going to rock anyone’s world, but for a cheap TV tie-in it’s a lot more engaging than it has any right to be, serving as a pleasant opportunity for any series fan to spend a few more hours in Gelfling company.

This Netflix tie-in is an awkward adaptation, but a surprisingly smart strategy game.

As editor of PC Gamer magazine, Robin hides in the world of print, guided by his belief that a review only exists if you can hold it in your hands. He loves RPGs, turn-based strategy, and absorbing pointless videogame lore.