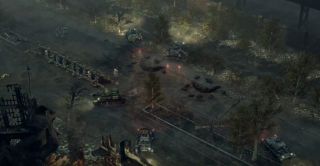 If you played strategy games towards the tail end of the 90s/early 2000s you may recall Sudden Strike and its sequel SS2—tactical RTS affairs set in World War 2 times that enjoyed a distinct, although somewhat cult, following. A third and fourth game followed in 2007 (2008 in the US) and 2010 respectively, however the introduction of a 3D graphics engine and overhauled UI divorced them from their forerunners in both style and aesthetics.

Now, publisher Kalypso Media and developer Kite Games have revealed Sudden Strike 4 is on its way, aiming to touch down at some point in Q2—April 1-June 30—2017.

“Developed as a full-fledged series entry and not a remake or reboot, Sudden Strike 4 sends you off on three extensive campaigns set amongst the battlefields of World War II,” reads a statement. “Commanding the British and American, German or Soviet troops, you will lead over 100 different units into battle, including the German bomber Heinkel He111, the Russian T-34 tank, the British Hawker Typhoon fighter plane and the notorious German Panzerkampfwagen VI Tiger.

“In a first for the Sudden Strike series, you can now choose from one of nine individual commanders, such as George Patton or Bernard Montgomery, who will each allow for different approaches to combat and boast unique abilities.”

You’ll do all of that across three campaigns “with over 20 missions” in either single-player or competitive multiplayer mode. Our console cousins are getting the latest series entry when it arrives next year, but modding support remains exclusive to PC via the Steam Workshop.