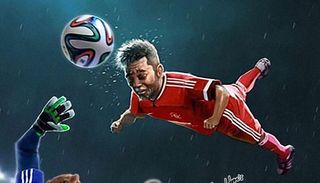 The odd thing about Sensible Soccer, the early-90s "association football videogame," is the title: "Sensible Soccer." Not football. Soccer. It was, to be clear, developed by a UK-based studio called Sensible Software, and so maybe the allure of alliteration trumped European sport sensibilities. Hard to say, and it doesn't really matter. What's important here is that Sensible Soccer went over big with fans, and now Jon Hare, the "godfather of football videogames," has launched a Kickstarter to help fund a follow-up called Sociable Soccer.

Sociable Soccer is a "spiritual successor" to Sensible Soccer, but it sounds like it won't stray too far from the formula laid down by its predecessor. A zoomed-out, overhead perspective similar to the original game remains available, and it will also offer "dynamic pitchside cameras" for a view more akin to those of FIFA or Pro Evolution Soccer. It will be more of an arcade experience than a hardcore sports simulation, allowing players to represents nations, clubs, or even user-created clans. More than 30 single-player trophies are up for grabs, and there will be local and online multiplayer support as well.

The developers are seeking £300,000 ($457,000) in support, and seem to be off to a pretty decent start, ringing up more than £13,000 and counting in its first day. That may be because, as Tim put it, it's "basically catnip for old Euro football nerds like me." The Kickstarter runs until December 12.