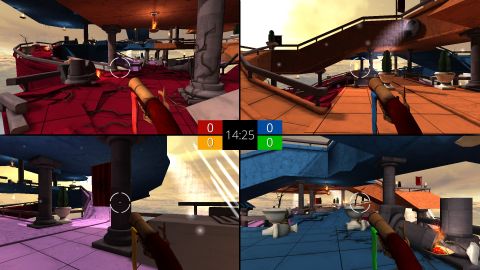 Easy going in tone but frantic and stressful by nature, Screencheat seizes on a single novel idea and builds an enjoyable couch shooter around it.

We take for granted that our enemies are visible in first-person shooters. Fair enough too, as shooting them might not be fun otherwise. That’s according to conventional wisdom anyway, which Screencheat shirks from the outset. A small project developed by Melbourne studio Samurai Punk, Screencheat is a competitive splitscreen shooter where four invisible players duke it out in tight, colour-coded arenas. You’ll laugh, you’ll cry, you’ll cop a confetti spraying rainbow piñata in the face.

Instead of monitoring your own quarter of the screen, in Screencheat you’re encouraged to spend more time watching what your opponents are doing in order to figure out where they are. Those reared on Nintendo 64-era splitscreen shooters (Goldeneye 64, Perfect Dark) will be familiar with this reprehensible tactic, terminally impossible to police. Screencheat wields it as a central mechanic.

As a concept it doesn’t sound very fun, but in practice it is. Maps have distinctly coloured regions and landmarks which give away the location of each player. Movement and traversal is closer to the spirit of fast-paced arena shooters, with no fall damage complimenting the breakneck verticality of most of the game’s five maps. In standard deathmatch kills come thick and fast: weapons emit faint evidence of their owner’s location, and I quickly learned that precision and planning is more important than spamming the attack key, which most newcomers instinctively do. With one exception the maps tend to span upwards rather than horizontally, meaning I spent a lot of time in the air, propelled by air vents and trampolines, spraying bullets ungracefully as I plummeted.

Weapons are invariably one-shot kills, so there’s initially no incentive to explore Screencheat’s weirder weapons (y’know, explosive bouncing bears, modified car engines). The default blunderbuss boasts a generous bullet spread, and I was never attracted to any of the slower weapons like the aforementioned Chefolet car engine or grenade launcher. Melee weapons like the firey Hobby Horse and the Candelabra are good in tight situations, with the former providing a burst of speed at the expense of invisibility.

The five game modes range standard fare (deathmatch, a king of the hill mode) through to Murder Mystery, which assigns each player a specific target to be killed with a specific weapon. While this has its charms, Screencheat feels more at home in conventional modes where you’re free to focus on shooting and surviving, because that alone is usually stressful enough. Having to keep track of the location of three other players, with these locations changing by the second, is fatiguing after a while. I couldn’t handle playing Screencheat for more than half-an-hour at a time, but then, I don’t think it’s designed to be binged on.

That’s because Screencheat demands to be played on the couch with friends, and it doesn’t pretend to be a serious first-person shooter. Its breezy and whimsical atmosphere situates it closer to Mario Kart than say, Counter-Strike. The thickly accented Australian commentary seems to mock the severity of other first-person shooters, and the kill messages are often ridiculous (it’s possible to be ‘Windows Vista-ed’ in Screencheat). While online splitscreen play is an option, the game shines among friends you can punch and swear at.

Which isn’t to say Screencheat lacks depth. Over the course of my five hours with the game I learned some pretty neat tricks. The crossbow seems like a useless weapon at first, requiring a level of precision virtually impossible against invisible foes, but once I learnt that it actually shoots laser beams which can wrap around corners, I started to use it to set temporary traps. Getting good at Screencheat isn’t about being a precise shooter or learning the maps but instead movement, observation, and lightning-quick thinking. Being good at Call of Duty won’t necessarily hold you in good stead if you play Screencheat, which was a huge relief for me.

While Screencheat’s premise is unique, it feels very much part of a burgeoning new approach to shooters on PC. Independent studios are starting to squeeze new life from the genre: see the strange warping mechanics in S.W.A.P. or the killstreak-centric Megaman-aping Wrack. Screencheat is a refreshingly barebones game which focuses on one particular thing: you don’t gain XP, you don’t climb leaderboards, and you never unlock weapons your opponents don’t have access to. For these reasons it’s the most fun I’ve had with a multiplayer game for a long time. I heartily recommend it, especially if you like Windows Vista-ing invisible crash test dummies with modified car engines.

Easy going in tone but frantic and stressful by nature, Screencheat seizes on a single novel idea and builds an enjoyable couch shooter around it.