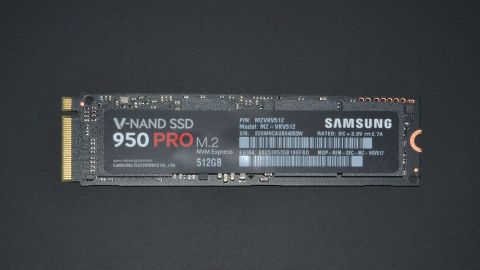 The increased capacity takes the 950 Pro to new heights, still in a tiny package.

More in more ways than one

Last year, we looked at Samsung’s speedy new 950 Pro M.2 NVMe drive. At the time, we noted that while it was fast, we really wanted to test the 512GB model. Nearly three months later, we’re finally able to fix that omission. Much of what we said in our previous review still applies, with the advantages of the 512GB model being more than just the raw capacity. Unlike hard drives, SSDs benefit tremendously from increased parallelism. In general, this means the more NAND chips you have available for concurrent reading and writing, the faster your drive. It’s sort of like RAID on a chip level, with the SSD controller frequently being the limiting factor. By doubling the capacity, Samsung also doubles the number of NAND chips, and that means it’s better able to keep humming along at top speed.

We can easily see the expected gains by just looking at the spec sheet, where the 512GB model potentially offers a 10–15 percent improvement in read speeds, along with a more substantial 30–70 percent boost to write performance. This isn’t too surprising, as reading NAND is less difficult than writing NAND. Writing NAND can potentially keep a chip busy for a few extra cycles, but thanks to wear-leveling algorithms, adding more chips gives the controller more options. The reason for wear-leveling, if you need a NAND 101 refresh, is that NAND cells have a limited number of program/erase cycles. Whereas on a hard drive, overwriting a file usually uses the same physical sectors on the spinning disk, with NAND it’s better to mark a cell as “available” but do the actual write to a different cell—one with the fewest used P/E cycles. This improves performance as well as drive longevity.

As a whole, the 512GB 950 Pro looks to improve performance by 10–50 percent, depending on the task at hand. It also doubles the endurance to 400TB TBW (total bytes written), with a five-year warranty. That means you could write over 200GB of data every day with the 512GB model and still not use up all the P/E cycles. Or to put it another way, even after a week of intensive use for our testing, we’re only at 5TB TBW; once we stop running sequential write tests and just use an SSD as a regular drive, normal use generally averages less than 5GB per day. So no, we’re in no danger of killing off any SSD, unless we specifically attempt to do so. And as a final bonus for the 512GB model, it drops the price per GB from $0.75 on the 256GB model to $0.64 per GB. That’s still about twice the price per GB of the 850 Evo SATA drives (which use less expensive TLC V-NAND), but peak performance is much more than twice as fast, as we’ll soon see.

Too Hot to Handle

All of this is well and good so far, but there have been issues at times with small M.2 drives throttling performance due to excessive heat in the controller. The UBX controller used in the 950 Pro has three Cortex-R4 ARM cores clocked at 500MHz. While these cores are not as fast as the Cortex-A57/A53 cores in modern smartphone SoCs, they’re substantially faster than the cores in most traditional microcontrollers. For reference, Samsung’s progression in SSD controllers has gone from tri-core 300MHz in the MCX and MDX, to tri-core 400MHz in the MEX, MGX is a dual-core 550MHz design, MHX is tri-core 400MHz again (but with 2GB RAM vs. 1GB on the MEX), and finally, the UBX is tri-core 500MHz.

Increasing clock speeds mean more power and heat, and thus the controllers are designed to reduce clock speeds if temperatures get too high. That wasn’t a common issue when dealing with SATA drives, but with PCIe offering over 5x the throughput, the UBX controller can get a serious workout. While we don’t have tools to measure the real-time clock speeds of the controllers, we did test the 950 Pro 512GB with and without additional cooling.

For our purposes, cooling was pretty simple: We placed a case fan near the SSD and angled it to blow across the drive. That was sufficient to eliminate throttling, as far as we can tell, and some companies are even creating M.2 add-in boards with heatsinks to help cool M.2 SSDs. In our charts, we’ll highlight both the cooled and uncooled performance of the 950 Pro 512GB.

That brings us to the benchmarks. For our SSD testing, we’re running a Skylake processor in a Z170 motherboard. Below are the full specifications.

When we first looked at the Samsung 950 Pro, we knew it was a great drive. Unfortunately, the drive we really wanted to test was in short supply at the time, so we had to settle for the 256GB model. We expected even better performance from the larger drive, and it doesn't disappoint. There are times when it's not the absolutely fastest drive we've tested, as the Intel SSD 750 1.2TB holds the crown in six of our 10 tests, but that's a bit unfair. For starters, the SSD 750 has three times the peak rated power draw, more than twice the raw NAND capacity, and it uses a PCIe card equipped with a large heatsink. It's also more expensive on a per gigabyte basis.

Where the Intel SSD 750 excels is in long periods of sustained drive activity (which for consumers, mostly means benchmarks). It also wins out in 4K random write performance by a decent margin. But there's no putting an SSD 750 into a laptop, no matter how much you might want to, and for less strenuous workloads the 950 Pro 512GB often takes the checkered flag. This includes both of our real-world tests, the 20GB file copy and the PCMark 8 storage bandwidth.

Ultimately, what it comes down to is your intended use case, combined with how much capacity you need and how much you're willing to spend. The 950 Pro 512GB goes places other SSDs can't, and if you're lucky enough to own a modern laptop with an M.2 slot and NVMe support, it will allow you to upgrade from a weak-sauce 128GB drive that so many OEMs still insist on using, to a healthy half a terabyte. In daily use, the drive is so fast that storage is no longer a system bottleneck—games load as fast as your CPU can chew through the data, Windows boot times are frequently in the single digits (as in

Do you need this much storage performance? Probably not, as this is a classic case of diminishing returns. But if you've covered all your other bases and still have cash to burn, not to mention a system that supports M.2 NVMe SSDs, you definitely want one of these hot rods. Until the competition releases their next generation SSDs, this is the best M.2 NVMe drive you can find.

The increased capacity takes the 950 Pro to new heights, still in a tiny package.