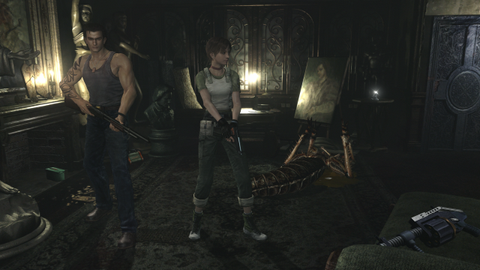 A beautiful remaster of a game that tries to recreate the magic of the original Resident Evil, but repeatedly fails to do so.

What is it? A survival horror set before the original Resident Evil.
Expect to pay £16
Developer Capcom
Publisher In-house
Reviewed on GeForce GTX 970, Intel i7-950, 16GB RAM
Multiplayer None
Link Official site

Originally released for the Nintendo GameCube way back in 2002, Resident Evil 0 is a prequel set before the events of the first game. This PC version features upgraded visuals, modernised controls, widescreen support, improved sound, a new mode, and other tweaks, but the game itself remains unchanged. It’s a slow-paced, challenging survival horror in the mould of the original—recently given a new lease of life in the superb Resident Evil HD Remaster—but is ultimately an inferior game.

You can now control two characters simultaneously: STARS medic Rebecca Chambers and escaped convict Billy Coen. Rebecca can mix healing herbs and squeeze into small spaces, while Billy is better with guns and has more health. You can freely switch characters at the touch of a button, even if they’ve been separated—which happens almost constantly. Or, if they’re together, the AI will take over the other character and obediently follow you around. You can also change how the AI behaves in simple ways, like firing at enemies if they encounter them, or not if you want to conserve ammo.

It’s a system that creates some tense moments. Sending a character into an area the other can’t access, forcing them to go it alone, is always nerve-racking. And it factors into the puzzle design too. In an early level, Rebecca is trapped in a room and Billy has to help her escape by sending items down to her through a dumbwaiter. In another Billy has to hand-crank an elevator while she rides it. But with the exception of a few set-pieces, it feels like a gimmick included for the sake of it. It doesn’t change the Resident Evil formula in any meaningful way and becomes a chore.

Inventory management has always been laborious in Resident Evil games, but just about bearable. Here, though, with two characters to manage—and the removal of those magical boxes that let you access a pool of stashed items from multiple locations—you spend far too much time shuffling items around and wondering what to take or leave behind. You can, mercifully, drop items at your feet and they’ll remain there. But then you forget where you left something and are forced to backtrack to locate the damn thing to solve a puzzle later down the line. It’s one of the most frustrating, obtuse inventory systems in gaming history. There’s a constant feeling of anxiety as you encounter yet another important-looking item with a full inventory.

The opening, set aboard a zombie-filled train, is excellent. It’s familiar Resi stuff—finding keys, reading notes, solving puzzles—but it’s as well-designed as anything in the original. The cramped carriages are brilliantly claustrophobic, and the lavish Orient Express decor is beautiful. But then you leave the train and suddenly the game runs out of ideas. You find yourself in a mansion that’s actually an Umbrella facility. Sound familiar? There are a few new enemies, including zombie apes and annoying leech things, but you can’t shake the feeling of deja vu throughout. It has all the elements that make the first game an enduring classic, but they’ve been arranged in such a way that it feels like a bad cover version of a beloved song.

It’s a shame, because it looks stunning. This is a lavish, loving remaster, and the combination of detailed, atmospheric pre-rendered backgrounds and real-time lighting and shadows is masterfully done. I love the subtle animations too, like the wine bottle rolling around on a table in the train’s dining car. As well as the option to switch from the old ‘tank’ controls to a more modern movement style, there’s a new mode that lets you play as regular series villain and sinister sunglasses aficionado Albert Wesker. He has a range of superpowers, courtesy of the Uroboros virus, including running really fast and unleashing a blast of energy from his creepy glowing eyes. It’s one of those classic Resi gimmick modes, but doesn’t make up for the fact that the core game is so disappointing.

Resident Evil 0 looks amazing, especially considering it’s almost fifteen years old, but it feels like a pastiche of a much better game. Some people might find the need for constant, careful item management satisfyingly challenging, but to me it feels like unnecessary busywork. Throw in a messy, ludicrous storyline (even by Resident Evil standards) that clumsily tries to slot itself into the larger series mythology, unimaginative enemies, and a general feeling that you’ve done all this before, but better, and you’re left with a game that’s very hard to love.

A beautiful remaster of a game that tries to recreate the magic of the original Resident Evil, but repeatedly fails to do so.