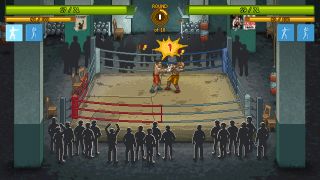 Punch Club is billed as a retro-styled “boxing tycoon management game,” but there's a lot more to it than simply guiding the career of the next Great White Hope. When you were young, you witnessed the brutal murder of your father, and now it's time to uncover the truth. Eat chicken, train hard, and chin dudes as you climb the ranks of the Punch Club, with the ultimate goal of learning the identity of the man who killed your old man. It sure sounds interesting, and I'm really looking forward to trying it. But it turns out I'll have to wait until Twitch beats it first.

Punch Club is currently being played on the TwitchPlaysPunchClub channel, with viewers voting on what should be done as the game progresses. Train or fight? Go to the gym or grab some lunch? Weights or speed bag? Rest or KILL HIM? The whole thing is clearly modeled after TwitchPlaysPokemon, but with higher stakes: Developer Lazy Bear Games says it won't release Punch Club until Twitch manages to finish it. If the viewers can get to the end of the game tomorrow, it'll come out tomorrow. And if they get sick of it and give up, well, you'll always have your memories of the pre-release Steam page.

Actually, you'll still get to play the game, you'll just have to wait longer. If Twitch can't or won't finish it (which seems unlikely, given the evident enthusiasm of the 1000+ people currently “playing”) Punch Club will go live on January 25. For now, it's available for preorder for 20 percent off its regular $10/£7 price.