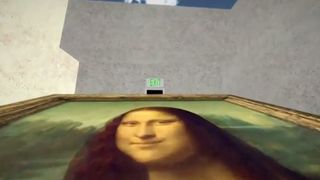 Remember that wonderful, brain melting feeling you had when you opened and jumped through your first portal—how in an instant, it completely changed the way you thought about space and navigating a game level? It's been a while since someone has completely upended the basic laws of physics like that, but this tech demo from Pillow Castle Games, a five person student team in Carnegie Mellon University, is definitely on the right track.

Pillow Castle said on Reddit that the video shows off just a “fairly old” tech demo, while the game itself is deep in development. But it makes the potential obvious. The basic idea is to let you play with forced perspective. It's that thing you do (that never works) when you go to the Washington Monument and take a picture with it in the background, pretending that you're eating it or holding it up like a giant. Small objects close to your point of view seem big, big objects that are far away seem small.

The tech demo shows how you can grab a big object in the distance, instantly making it as small as it seemed. Alternately, you can change your perspective to make a small object seem huge, let it go, and it becomes huge. The video goes on to show how this concept can be used to solve puzzles. Can't jump over a gap? Take a small item and make it big enough to be a bridge. It looks crude, but it's really impressive, especially toward the end, when it incorporates a few other ideas (portals included) for even more interesting results.

The tech demo, titled Museum of Simulation Technology, had previously won the Audience Award and Best Technological Game Award at the Sense of Wonder Night event at the Tokyo Game Show, which is like GDC's Experimental Gameplay Workshop.

The Pillow Castle developers said that they consider themselves “storytellers first, technologists second,” so the final product will include a proper story. Pillow Castle isn't ready to talk about a release date, and at the moment is not considering a crowdfunding campaign.