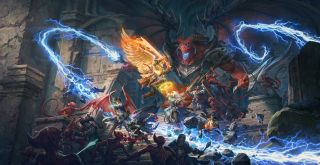 Owlcat Games has announced that Pathfinder: Wrath of the Righteous will be getting a much-requested turn-based combat mode.

In its latest Kickstarter update, Owlcat confirmed that, while the game, like its predecessor, is still being developed and balanced with real-time-with-pause combat in mind, it will also introduce an option that lets players play in a more traditional turn-based fashion as well.

Owlcat cites a specific mod for Kingmaker, 'Turn-based Combat' by Hsinyu, as the motivation behind adding the feature. Much like the mod, Wrath of the Righteous will let you swap between turn-based and real-time combat on the fly, to "fight any encounter in either mode at any moment".

Wrath of the Righteous has completely smashed its Kickstarter goal of £231,628, and at the time of writing is hovering just over £800,000 with 26 days still to go. All but one of its stretch goals achieved, meaning things like horse-mounted combat, extra companions, new races and animal companions are all going to be included in the game.

An indirect sequel to Kingmaker, Wrath of the Righteous is set in the demon-infested Worldwound, where you must juggle your usual RPG adventures—including potential romance options—with maintaining a stronghold and armies to help fend off the demonic invasion.

Considering it's still in the Kickstarter phase, we don't know a whole lot about Pathfinder: Wrath of the Righteous. Owlcat Games is aiming for a June 2021 release, though, which means we should be hearing a lot more about it in the months to come.