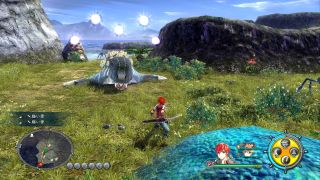 This page on Steam is looking increasingly healthy, as JRPG-focused developer Nihon Falcom gradually ports many of its old (and less old) games to PC, and to Steam. Trails of Cold Steel is the next up, due in just over a week, but it seems the company has plans to release many more of its titles over the coming months.

Speaking to TechRaptor, in an answer translated by NIS America, Nihon Falcom president Toshihiro Kondo had this to say—in response to a query about whether the company was actively pursuing PC releases for more recent Nihon Falcom games:

"We have no hesitation about releasing games on Steam. Rather, given that we don’t have a large staff, we mainly have to rely [on] partners to help us realize a PC port. When we first started releasing games on Steam, we were initially unsure of whether or not players would want to play our older games. However, as we gradually released games on Steam and saw the very positive reaction that was much greater than we expected, we feel like we want all of our games that come out to [release] on Steam."

There aren't too many big games left that haven't made the leap to Steam, but one standout is Brandish: The Dark Revenant, the 2009 PSP remake of Nihon Falcom's old dungeon crawler Brandish, which finally received a North American release in 2015.

So yes, we can expect more Nihon Falcom games on PC in the future, which is excellent news.