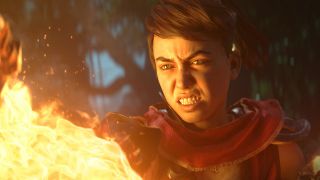 It's a pleasure to reveal a brand new Magic card right here on PCGamer.com. We love the game and have been enjoying both physical card contests and Magic: The Gathering—Arena, which is easily the best digital version of Magic to date.

Today's reveal showcases an inexpensive card that may cost your opponent a lot, if they enjoy a spell-heavy deck. It's an Instant that will stand against powerful magic decks that rely on sorcery. "For each spell and ability your opponents control, counter it unless its controller pays 4".

It's a great 'nope' card. Black or red deck coming at you with a devastating spell combo? Keep three mana in reserve and block with Whirlwind Denial. In the early/mid game it's unlikely your opponent will have the mana to prevent their magical attacks from being denied.

Once you've shut down your opponent's spells, it's time to counterattack with swift blue summons. Wizards of the Coast have kindly provided an exclusive preview of the card art and rules below. We see a knight parrying spells with his shield in a speedy whirlwind. I think it's important that you say the card quote to your opponent when countering spells with this card—"No, no, and... no."