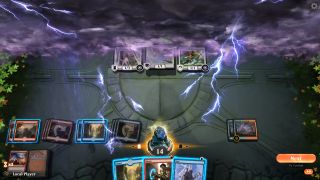 (Image credit: Wizards of the Coast)

Need an MTG Arena beginner guide? I don't blame you: decades of casting history can be daunting for new spellslingers, but deciphering the basics of what's made Magic the godfather of collectible card games starts with a single step. And I'm going to help you take it.

So whether you’re coming to this MTG Arena beginner guide as a veteran planeswalker, or someone trying to find their spark for the first time, I’m here to walk you through what you need to know to set yourself up for some successful sorcery.

Once you first log into MTG Arena, the robust tutorial covers the the game's different phases, plus to how to read cards and pay for spells. Even if you’re experienced with the physical version, still go through it to familiarize yourself with Arena's flow. Regardless, you’ll still get five starter decks—one for each of the five colors in Magic—that you can always use.

These basic decks are a great way to get familiar with how the different colors of Magic play. They’re also a good way to start playing games and taking on the daily quests, which reward experience and gold. They’re your starting point for adding new cards and experimenting with deck building before you get enough resources to craft one of your own.

How do MTG Arena currencies work?

Gold is Arena's free currency, which is earned by completing quests, winning games, and reaching certain mastery levels. Spend it on single packs and to enter events, like drafts or sealed. Gems, however, are purchased with real money, or earned as rewards from some events. You can use them on anything gold can be, but there are some events that can only be entered with gems.

Opening packs and achieving particular mastery levels reward wild cards tied to Magic’s different rarities: common, uncommon, rare, and mythic. Some packs replace a card with a wild card of the same rarity, but with every pack you open you earn credit towards additional ones. Wild cards can be redeemed for any card of their rarity and are crucial to building decks.

Naturally as you play, you’ll earn experience. This progresses you through the Account Mastery levels and the levels for the newest set. As you work through the mastery levels, the first 20 levels reward Mastery Orbs. These can be spent on your Mastery Tree to unlock access to cards and eventually—when completing two adjacent parts of the tree—five additional dual-color starter decks. When you get to the end of Account Mastery, you’ll earn wildcards (eight common, four uncommon, two rare, and one mythic), and then unlock the remaining five dual-color starter decks.

With Set Mastery you’ll see a free track at the top—which lets you earn some free packs and the odd Mastery Orb for the Set Mastery tree—and a paid Set Mastery track that gives a lot more rewards (plus the free ones).

How to get gold and new MTG Arena cards

Like other card games, Arena gives out daily quests. Rated at either 500 or 750 gold, these quests stack in your queue to a maximum of three, one of which you can reroll every 24 hours.

Each day there are escalating rewards for your first 15 non-bot wins. If you manage all 15, you’ll receive 750 gold and six individual card rewards. They're at least an uncommon—with a 7% chance to be rare, and 4% to be mythic. In other words, it’s worth trying to get some or all of these wins every day, if you can spare the time.

Booster packs are 1,000 gold regardless of set, and give you five commons, two uncommons, and one rare or mythic. More confident or experienced players can also spend 5000 gold on a ranked draft, with which you select 40 individual cards from the draft to build a deck with basic lands, with additional gems and pack rewards for wins.

What modes can I play?

Play is the most casual and approachable game mode: it attempts to match you against an opponent with similar deck strength. Ranked does the same, but matches are based on your current rank, and earn you rewards based on your final rank at the end of each month-long season.

Traditional modes work similarly, but with best-of-three matches instead of single games. Bot matches are good for testing your deck, but won’t reward you in the same way (though you can get quest progress from them).

Then there are the Sealed and Draft events (and sometimes other limited events join them). These usually cost gold to enter, but allow you to pick cards from a draft with other players, open sealed packs, and then build a smaller-than-normal 40-card deck. In both cases you get to keep all the cards you draft or open. These modes also offer prizes based on how well you play the deck you build.

Also, Arena has two formats: Standard and Historic. Standard is a rotating format, which means that older sets leave and cards from them aren’t legal to play anymore. This keeps the format fresh and interesting, but also means you’ll need to keep updating your collection.

Historic is a wild west, encompassing all sets that have come to Arena since inception. It’s not as popular, but it has the benefit of letting you use any cards, even after they’ve rotated.

How do I build my first deck?

Once you’ve amassed a good collection of cards, and have a better idea of what colors and styles of decks you prefer, you can start building your first custom deck. You’ll be able to choose from Standard, Historic, and Traditional Standard. Both Standard both types are popular, but Historic lets you use cards that are in your collection, but have rotated out of Standard.

Start with 24 of your 60 cards devoted to land. This leaves 36, or four copies of nine other cards to work with. You can fill these nine slots with creatures and removal spells to tackle your opponent's creatures, and other spells that fit your theme and colors.

Sideboards are used in Traditional formats, which are best-of-three matches instead of single games. They’re an extra pool of 15 cards that you can exchange cards from your deck with on a one-for-one basis after each game. Use them to shore up your deck's weaknesses.