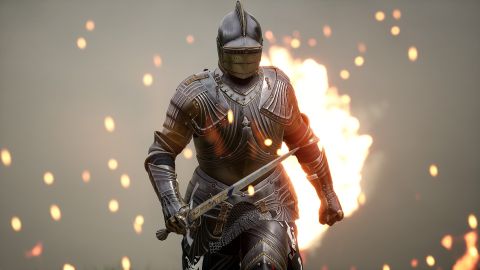 High skill cap melee combat is equally rewarding and daunting, though the archery and support roles could use some work.

Most games that hand you a sword and point you in the direction of a battalion of foes feel empowering and heroic. After a few rounds of Mordhau, the prospect of heading once more into the breach seemed more terrifying than anything else. Of all the multiplayer melee games I’ve played over the years, this one has decidedly the highest skill cap and the least patience for those who haven’t taken the time to learn its complex, twitch-based combat. The upside to that is when you do go on a hot streak, you feel like way more of a badass than any of those more forgiving games can ever let you feel.

The basic premise is pretty simple. In the default Frontline mode, you take up arms as a rugged warrior from one of nine classes (or you can design your own) and rush into the fray in up to 32-v-32, objective-based skirmishes on attractive, realistically-structured medieval battlefields. Then, you probably die pretty quickly to someone a bit quicker or more experienced than you and respawn, hopefully having learned something to take forward into your next brawl.

Each clash of swords can look deceptively simple, but is actually highly complex in the huge variety of attacks, parries, and counters available to you. A well-scripted and straightforward tutorial will run you through the fundamentals, but it’s another matter entirely to execute the correct moves at the right time. It takes many hours just to start feeling competent, but the satisfaction of growing confidence as your execution improves is something no numerical progression system can really replicate. It reminded me a lot of Sekiro, in that I started out as an absolute scrub and eventually started to think of myself as a badass swordsman. I mean, at least sometimes.

Swift as a coursing river

Everything you do in melee is highly dependent on split-second timing, so sloppy or indecisive swordplay will be punished heavily by experienced players. You can’t hold down block while brandishing a sword, for instance. Left-click executes a timed parry that only works for about a second, so you need to sync it up with your opponent’s movements. And almost any defensive measure you deploy has an equivalent counter that will slap it aside with ease, so most duels will favor whichever player can read their opponent and react quickly and aggressively.

It is a bit of a bummer that there’s not a lot you can do when you’re just learning the ropes and want to take a more relaxed, support role. There is an engineer class who can shake things up by deploying siege weapons and the like, but I often found my contributions in this area were relatively small and easily undone by the other classes. In other multiplayer games like Battlefield 5 and Overwatch, I can focus on reviving teammates or locking down a point if I want a little bit of a break from high-intensity combat, and Mordhau doesn’t support that playstyle especially well.

Even with its early success, I worry that this will shrink the number of players who can really get into Mordhau. If I want to invite my younger cousin who isn’t up to Murderlord level in melee action games into a match, there would be comparatively less for him to do that might make him feel useful. Even the most hardened swordsman has to admit that giving less twitch skilled players something meaningful to do only helps fill the servers and give us more fresh meat to beat up on. That doesn’t work if they all get frustrated and leave.

Archery, too, I found a bit disappointing. Mordhau has gone the route of making arrows very powerful, but very difficult to land a hit with. Drawing back the bow requires about a second in which your crosshair moves in a semicircle, making it almost impossible to aim, then gives you a couple seconds of a steady hand before you start to wobble and lose your aim. The projectiles themselves are fairly slow and experience significant drop-off after leaving the string. This comes across as very realistic, but not especially fun, and it makes becoming an even somewhat effective archer even more difficult than getting the hang of melee.

The root of the problem is trying to simulate realistic archery in what are, ultimately, pretty unrealistic conditions. You didn’t see a lot of medieval battles with a couple dozen guys in armor darting around in loose formation, changing direction on a dime, jumping over logs and intermingling with each other’s troops. It’s chaos, usually leaving archers vulnerable on the sidelines to skirmish and try to take 1000-to-1 shots of opportunity at individual targets. In reality, these types of troops would only have been deployed en masse to fire at stationary formations. The one place it does work kind of decently is on maps with walls or a palisade where archers can take shots at advancing enemies from a position of safety. But on bigger, open battlefields, what’s the point?

Mordhau also features two other gameplay modes: an at this point almost ubiquitous Battle Royale and a player vs AI Horde mode. I didn’t like either of them as much as the default Frontline, but Horde can be a fun way to learn the ropes with the help of some more skilled players without having to worry too much about being skewered by those same veterans.

In Horde, you start with no equipment and have to kill waves of AI attackers to get money to buy better stuff. The baddies will keep pace with you, however, gaining better equipment and coming in greater numbers from one wave to the next. Their combat ability is significantly inferior to a skilled player's, but they have a tendency to mob up on any solo fighters they can single out. It becomes important to stick together and use formations and natural choke points to survive. Overall, it’s not as much a test of the things Mordhau does best as the PvP modes, but it’s still a fair bit of fun.

Battle Royale is my least preferred of Mordhau’s modes. Like Horde, you start with no equipment and have to scramble for randomized loot from chests scattered across the map. It’s a familiar song and dance from there, as the playable area will slowly shrink to force confrontations and the last one standing wins. Having played other Battle Royales, I didn’t find anything spectacular about it that would convince me to come back when there are so many existing options for battle royale and Mordhau’s other modes are more entertaining.

It's also not the best fit for newer players. If you haven’t really mastered the melee systems yet, you’re likely to die quickly and then sit around for several minutes while the match finishes or requeue and wait for a new round, which may take a while itself depending on how the servers are behaving. Either way, you don’t get thrown back into the action as quickly like in Frontline, which means fewer chances to learn from your mistakes and test out new tactics. I’d therefore recommend avoiding it until you’re already finishing in the top half in Frontline matches.

Take your Mordhau mercenary skills to the next level with our builds guide and tier list. Or, if you really want to be a jerk, learn how to play Mordhau like a right bastard. You can also read our general tips if you need some help staying alive during the melee.

Mordhau’s kit design and progression system is very in-depth and interesting, aside from the odd fact that you get the choice between several skin colors that are all just different shades of white. This isn’t supported by history to begin with, but Mordhau also doesn’t seem to be trying to simulate any real-life historical factions or events, which makes it especially weird.

There are a lot of meaningful equipment options, which let you be anything from a lightly-armored berserker with a big, eff off axe to a tanky knight of the realm with full plate and a deadly mace. New visual and mechanical options unlock as you level up your profile from one match to the next, so there’s always something shiny and new to look forward to.

My biggest complaint is online stability. The matchmaking sometimes doesn’t even work at all (though I had very few problems joining matches from the server browser), and there were times when I spent over two hours in a queue without successfully getting into a match. That experience wasn’t super common, but random lag spikes and even getting booted from a game due to connection issues were. Performance was also very inconsistent on some maps even with a GTX 1070. The devs are aware of these issues and it has seemingly been getting better over the last couple weeks, thankfully. But I still haven’t successfully queued for Frontline through the matchmaking even once, so you’ll want to use the server browser for that mode.

If you’ve got the patience and dexterity to take full advantage of its melee combat, Mordhau can be a real treat. Especially in the Frontline mode, slashing and stabbing across its beautiful and well-designed maps was really entertaining once I got my feet under me. The high skill cap and lack of good supporting roles can make it feel tiring at times, but it’s mostly worth it for the satisfaction that comes with increasing mastery.

High skill cap melee combat is equally rewarding and daunting, though the archery and support roles could use some work.