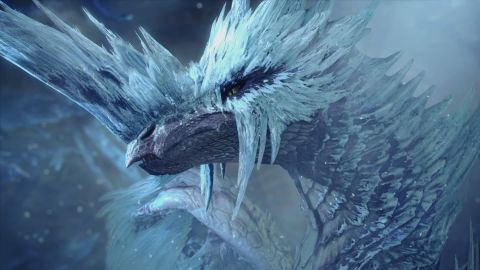 Fails to explore its themes but still delivers the series' most potent monster hunting yet.

If you're already a fan and want to know as simply as possible if Iceborne justifies its price tag, then let me put it like this: I had 200 hours in World before this expansion; I've racked up almost another 200 since I started it. So yes, there's a lot of bang for your buck. But if you're at all interested in Monster Hunter beyond a time sink then Iceborne complicates World in both incredibly interesting and deeply disappointing ways.

Iceborne is a mix of new monsters, regions, mechanics and a whole new endgame, all geared towards veteran players. For those who dipped their toes in World or didn't see it to the end, Iceborne has almost nothing to offer. Capcom has made this for their dedicated fanbase, and to its credit, managed to offer up not just something that will satisfy the desire for new content, but provide a new structure for the game’s hunts that goes beyond simply offering 'more'.

There is a lot more however, with new region Hoarfrost Reach adding a whole biome to expand the delight at the heart of Monster Hunter: getting to traipse around in its ecosystems and see how its monsters interact with them. Whether they're collapsing ice shelves or tearing up trees for battering rams, there's a sense of connection between its creatures and their surroundings that sells a rich, tactile world. Yet the better Capcom gets at this, the more convincingly animated and sounding their beasts, the greater the tension between what the game says it is and what it is to actually play.

There's always been an unease for me in playing these games where I'm asked to go out, invade the habitats of these species and kill them to make the next set of armour and weapons. With World the discomfort was extreme at times, beating monsters till they limped then being asked to lop off their tails to hear whines and squeals. You don't just kill the monsters in these games—you make them suffer. Engaging as its loop is, as enthralling as its fights are, I've always been disappointed that they've created such a rich ecosystem and the only thing they can ask me to do in it is murder everything.

Iceborne does dabble in some alternatives with a new sidequest asking you to go out and document the tribes of cats in the world with a camera. For an hour or two I got to see what Monster Hunter might be like if it were more Pokémon Snap, and the result was surprising. Details I'd never seen before kept revealing themselves now I was taking my time to observe. It's a small thing but a glimpse of what a kinder game could be like, making it all the more apparent what a cruel game Monster Hunter is.

It's never stopped me having a blast with the game, but Iceborne makes it even harder to ignore, with cutscene after cutscene featuring our cast of hunters tackle their nature. By tackle, I mean claim to be part of the ecosystem and that, by killing these monsters, they're somehow preserving things. It's a preposterous notion (our hunters aren't even from this continent!) and yet that the characters discuss it suggests Capcom are at least aware of the dissonance in its story. Yet rather than actually address this or just go on ignoring this aspect of its world building, Iceborne lands on an awkward middle ground, drawing attention to the moral bankruptcy of its characters with a nonsense lie. If these games are going to continue to ask me to think about their world then they need to spend more time entertaining the notion that its hunters are the bad guys.

It goes against the charm and warmth of so much of the game too, something that Iceborne excels at. The cosy new hub Seliana is a winter getaway full of delights, new mini games, and even saunas. The new chef, the Grammeowster, is a character of such sheer delight that I audibly squealed the first time I saw her cooking. All of this gets put to use with a vital overhaul of the games social space, with the Seliana Gathering Hub giving players an area where they can spend time together between hunts—letting you craft and access all the vendors alongside one another. It pushes Monster Hunter into a much more readily shared experience, making the game feel like a nightly event. You can all be jumping into the same hunts or off doing your own thing, but you all come back to that same space to hang out, muck about with gestures, show off new weapons or splash in the pool. No, for real, there's hot pools now.

Monster Hunter World is a much more stable PC game than it was at launch, and since Iceborne is an extension of the same build, it performs as you'd expect. An extra graphical option for snow will tax your GPU RAM a touch more if you crank it up, but that's about it. A few performance patches made 60fps at 1080p easier to hit for most mid-range PCs and improvements to mouse and keyboard controls have since made MHW feel right at home on PC, but it's still a hog at higher settings and resolutions. With the High Resolution Texture Pack installed and everything turned up, it runs 60-90 fps depending on the action with a GTX 2080 and an i9-9900K. You'll need a top tier PC to see MWH at its absolute best, but it still looks and runs much better than the console versions on medium settings on mid-range PCs.

The craft that goes into all the details of these spaces is absurd and so vital to offsetting the unpleasant moments where you brutally murder a monster fighting for its life. But the juxtaposition between these elements becomes harder to reconcile when the game keeps drawing attention to them.

Yet, in spite of my misgivings, it has to be said that nothing has battles quite like Monster Hunter, and Iceborne is the challenge I'd been waiting for since mastering World. The new fights feel crafted to poke at the weak points in a player's preparation and tricks. If it's not the cold eating at your stamina, it's monsters dripping explosive goo everywhere or wiping you off the map by summoning waves of water. The imagination on display is maintained right through to the final fight, finding ways to surprise and challenge even the most experienced of hunters. That's no easy feat given the game's elaborate nature, and doubly so when Iceborne piles on new mechanics. The grappling claw that lets you latch onto monsters and try to steer them into obstacles opens up a whole new skillset to master, and one that changes everything in the base game too.

Iceborne isn't a full blown sequel, but it still has touches of the radical that revitalises a game that's still thriving. Like the regions of its game world, Monster Hunter feels alive, bursting at the seams with things to try and, eventually, master. Importantly, it all feels substantial and integrated in ways that complement what's already there, instead of just being gimmicks to artificially expand the game's scope. When it comes to the monster hunting itself, Iceborne is Monster Hunter at its peak.

If there's one disappointment besides the iffy storyline, it's the fact that the game still has gendered armour sets and insists on making half of the women's outfits a combo of boob armour and bikinis. If the game's whole style was impractical outfits then maybe it'd sit better, but when the dudes are rocking elaborate but practical armour, it's sad to see the women stuck with mini skirts, their asses pushed into the camera through every crawlspace. Worse, the other half of the women's armour is great, stylish stuff. So why these fumbles? It's an objectifying gaze that I'd hoped the series would've grown out of.

No matter my complaints there's no denying how compelling Monster Hunter remains and how much Iceborne excels at improving the fundamental experience. The endgame is a promising new kind of format for the series that makes its hunts feel more organic, instead of the trawls through the quest board that the game utilises most of the time. This new region keeps you out in the world, keeps the monsters coming and reacts to the ones you hunt, evolving as you play. Without giving more away, it simply feels like the culmination of everything World was trying to bring to the series. Couple that with the polish on the multiplayer side and I continue to lose hours to this game.

There's so much substantial new stuff here, so much to see and do, it feels like one of those ludicrous platters the hunters are served before a quest. Of course part of that feast is a plethora of cutscenes that construct a clumsy storyline the game could have done without. Perhaps Capcom will one day find a way to engage more carefully with its themes. Until then I'll still enjoy the platter they're offering, but it can't help leaving me feeling a little empty at times.

Fails to explore its themes but still delivers the series' most potent monster hunting yet.