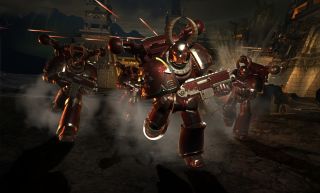 Furthering the Warhammer franchise's conquest of every genre in the universe, the MMO-ish, third-person shooter-y Warhammer 40K: Eternal Crusade has marched into Early Access, where it aims to remain for "a number of months".

In that time it will add "character progression, the strategic layer and territorial conquest", which, as I understand it, is the bulk of the game. Eternal Crusade is split into two sections: up to 30 vs. 30 PvP between the Orks, Eldar, Space Marines and their goth cousins, the outcome of which persists to give a semblance of overall territorial control, and five-player PvE against Tyranids that attack en masse. Over time, the game is set to develop into a true open world á la Planetside 2.

For now, it's about getting to grips with basic combat between the Space Marines and Chaos Marines. Steam reviews suggest that much is on point.