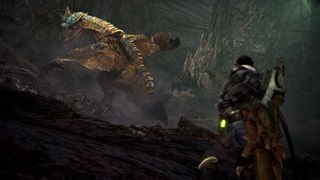 What is the key Tigrex weakness, and how do you exploit it? Monster Hunter World: Iceborne features a healthy mix of new monsters and old favorites, a roster lovingly assembled by Capcom to honor the past of the franchise while stretching its creative muscles with new designs. Banbaro and Beotodus are among the new faces, while series stalwarts like Nargacuga, Barioth, and Zinogre have been called up from earlier games.

Also among the returning monsters is Tigrex, everyone’s favorite sharp-toothed Flying Wyvern. And, naturally, we're here to show you how to take it down and use its bones for plush new armor.

Tigrex made its debut in 2007’s Monster Hunter: Freedom 2, making this second generation veteran one of the oldest monsters on Iceborne’s roster. It’s a Flying Wyvern characterized by a large head and enormous jaws, with yellow and blue stripes.

The webbing between its front and back legs allows it to glide short distances, and its tail sports a handful of deadly spikes. Speed is Tigrex’s greatest strength, meaning it can be hard to nail down in hunts, especially for those using slower weapons like the hunting horn and great sword. Here are some tips to help make things easier.

How to beat Tigrex

Despite being classified as a Flying Wyvern, Tigrex rarely takes to the skies. Instead it tends to quickly scramble around the arena. One attack it uses often is a charging rush that closes gaps in a heartbeat. Be ready to roll out the way the moment you see it lurch forward. And just because you’ve dodged it once doesn’t mean you’re in the clear: Tigrex likes to use this move several times in a row. The upside is that it often leaves Tigrex exhausted, giving you ample time to hammer away while it regains its stamina.

While Tigrex may not fly, it can glide, which it likes to do after jumping off a nearby wall or cliff. Similar to Monster Hunter: World’s Tobi-Kadachi, Tigrex leaps off the ground, latches onto walls, and dives at an angle towards you. When you see it jump, that’s your cue to dodge roll. Upon landing, Tigrex tends to pause for a bit, which provides a good opening for a few quick attacks.

Tigrex also uses its spiked tail to deal damage. When you see it wind up, keep your distance. A quick 360 spin is one of its favorite moves, though it will try to fake you out with a simple side swipe, too. Either way, employ the tried and true Monster Hunter ritual of cutting that tail off. By stripping it of its most important weapons, Tigrex becomes far less threatening.

Tigrex is also a fantastic choice to try out Iceborne’s new Clutch Claw slinger attachment. Because it moves so fast and leaves few openings for retaliation, the Clutch Claw is a great way to even the odds. Grab on and lead Tigrex into a wall to knock it down, and hammer away. The short pauses after a dive attack or its charge are optimal opportunities to employ the Claw.

By and large, stay as close to Tigrex as possible. Putting too much distance between you and the monster has a tendency to provoke those charging attacks which can be devastating for your stamina. Consider dropping a Health Booster on the ground near it so that you can recover health as you attack.

If you’re at all familiar with Tigrex’s past incarnations, you'll know what to expect with the Tigrex armor set. The yellow and blue scales are on full display here, with some eye-catching accents on the shoulders and helm in the form of sharp claws and horns. The boots sport large spikes as well, lending a frightening silhouette to any hunter.

Tigrex’s status as a Monster Hunter fan favorite made it a shoe-in for Iceborne. Thankfully, Capcom hasn’t toned down the difficulty of this fierce wyvern; in fact, it’s more formidable than ever. Follow these tips, and you'll overcome this satisfying challenge in no time.