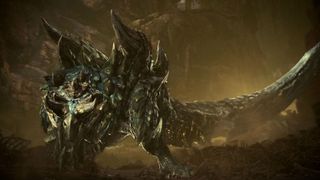 How do you exploit the key Glavenus weakness and claim its unqiue armor? With the release of Iceborne, Capcom’s big expansion to Monster Hunter: World, comes a truckload of new stuff, but it's one of the new beasties that we're interested in here: Glavenus, and its devilishly poisonous variant, Acidic Glavenus.

Capcom has lovingly crafted a roster of old favorites to accompany a host of new creations to build an impressive stable of monsters. Fan favorites like Nargacuga, Tigrex, and Barioth are joined by newcomers Banbaro, Beotodus, and a pair of new Elder Dragons. But, if you're struggling with Glavenus in particular, here's how to overcome it.

Glavenus is a tail-bladed behemoth that first appeared in Monster Hunter: Generation for the Nintendo 3DS. This Brute Wyvern resembles a spiky T. Rex covered in dark red scales. Two rows of spines run the length of its back, making it look like a sharper Anjanath. Glavenus certainly has an imposing frame but, with patience and bravery, you can beat this bladed beast.

It’s important to keep one thing in mind above all others: watch the tail. The monster’s sword-like appendage is its most important weapon, so be wary of its horizontal and vertical swipes. Keeping a distance is a great strategy at the start, as long as you beware the leaping tail slash that can close the gap quickly.

During the fight, Glavenus’ jaw, tail, and the spines on its back glow red. That’s indicates that it's preparing to augment its tail with fire, which is bad news. This makes the Fireblight status effect a real threat, so don your finest fire-resistant gear and prepare to snuff out the flames with plenty of rolling.

Mercifully, most of Glavenus’ fire-based attacks are short range. It tends to use the tail to kick up sparks and flame from the ground in a contained arc—so, again, distance is key. That’s not to say that Glavenus isn’t a threat at range; it can spit fireballs a fair distance. It's fairly uncommon, but definitely something to be aware of.

Because of the monster’s penchant for close-range ground attacks, a strong strategy is to get up high. Mounting Glavenus is a useful maneuver, so look out for ledges or slopes as an initiating attack. Better yet, use Iceborne’s new Clutch Claw to grapple yourself to the monster and get in some precious mounted attacks. After all, that sword tail is useless if you’re on top of the beast.

Iceborne brings not one, but two different versions of Glavenus. In addition to the standard fire-based model, there’s Acidic Glavenus. This variant is faster and more precise than its vanilla counterpart, favoring directional tail jabs over wide, sweeping arcs. It can also cover its tail in acidic crystals, which gives its attacks a chance to inflict the Defense Down status effect.

The Glavenus armor sets bear the spines of the monster, ensuring your hunter looks sharp. The alpha set comes with a helpful suite of skills that enhance larger, slower weapons. The helm’s two points of Focus will appeal to wielders of the greatsword and hammer, while many of the pieces come with Maximum Might, which greatly increases the affinity of your chosen weapon. Several of the strongest weapons in Monster Hunter: World come with a negative affinity stat, so stacking up on Maximum Might is a boon.

Glavenus is as fierce as ever in Monster Hunter World: Iceborne, but it’s by no means insurmountable. This encounter is likely to be one of Iceborne’s flashier fights thanks to the pyrotechnics of Glavenus’ tail and its fireballs, which should make the rewards even more worthwhile. So get out there, and get hunting.