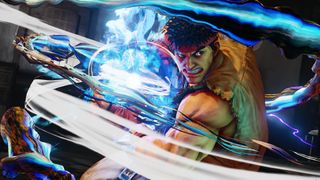 Fighting games weren't of much interest to me growing up. I dabbled in Super Smash Bros. and spent evenings button-mashing in games like Tekken and Soul Calibur, but I never took the time to learn how to play. That changed last September. Despite watching my family play Street Fighter 5 ever since its release, I was reluctant to try it out for myself. Picking up a game with a learning curve as steep as Street Fighter felt like a huge commitment—not something to take lightly.

On the other hand, I bought an arcade stick a few years ago, and was determined to learn how to use it—mostly just to prove that it wasn't a waste of money. Why learn on a regular controller when you can make things ten times harder for yourself? Fingers fumbling, I tried to get my bearings with this alien device. Even basic moves were tricky to nail. I was advised by my other half—a Street Fighter addict who’s been playing these games ever since he could hold a controller—to pick Ryu to learn the basics.

Training for around an hour each day, I spent the good part of a week practicing Shoryukens. In theory, the arcade stick felt like the correct tool to be using with its 8-way directional controls, but I struggled to burn the final down-forward motion into my muscle memory. Then suddenly, after hours of messing it up, something clicked. I could do five in a row. Ten, if I really wanted to.

I moved onto combos and Critical Art. Thanks to my time spent nailing the basics, now more complicated strings of moves flowed easier. I still can’t land my Critical Art perfectly, but I’m amazed by the progress I made after getting over that initial slump. As the best Street Fighter player in the house, my other half was my go-to guru. You’ll only ever improve if you play against someone better, so we set aside time to put the combos I learnt into action and get me acclimated to playing against a real opponent. Thanks to his patience, I eventually reached a satisfying level of competency. It was time to take things online.

Starting as a Rookie with zero League Points I was paired against other Rookies and Bronze brawlers. Having been trained by someone who knows the game rather well—and who plays cautiously and precisely—this propelled me into a whole new level of confusion. I was surprised, and maybe even a little jealous, of other players' ability to throw out their Critical Art whenever they pleased. They'd jump in constantly and spam special moves, repeating a failed attack until it eventually gobbled up a chunk of my health gauge. I had no idea how to handle this haphazard playstyle and, dumbfounded, I realised I had forgotten every combo I'd learnt. In the lab, I could consistently land the moves I had been tirelessly drilling into my muscle memory. Online? I was lucky if I could react to a sweep in time to punish it.

Reluctantly, I limped back into training, bruised and defeated. All of the hours I'd invested into the game had been called into question. While I'd learnt much, I could demonstrate so little when it actually mattered. After a quick pep talk I dusted myself off. I refused to let those losses get the better of me. I practiced combos until I started seeing them in my sleep and trained more regularly against my partner. Finally, after a few weeks, I was ready to return to ranked matches with a new sense of confidence. There's no way anyone at Rookie/Bronze will have put in as many hours as I have, and I was determined to perform.

After smashing my first match, I was ecstatic. I glided into a win streak, a glistening badge of honour that hung above my in-game name, warning my opponents that my Ryu was a force to be reckoned with. My training had paid off. Learning match-ups posed a new challenge, but my basic understanding allowed me to vacuum up League Points and creep up into the Bronze tiers. I still find online sessions exhausting, and I have a long way to go, but I've achieved my goal of being more than a human punching bag.

Street Fighter 5: Champion Edition launches today and I'm so happy that it's a fighting game release I can be truly excited for. SF5 is a grueling grind for newcomers, but picking it up this late in its life isn't an impossible task. I urge anyone toying with the idea of hopping into the series now to do so. Maybe I'm just a sucker for pain, but the rush I get when I land a max-damage punish on an opponent is unmatched in any other game I play. Documenting my progress has also helped me to improve, and I take great pride in rewatching old clips—despite how infuriating they can be. My desire to improve continues to pull me back, which is why I'm back in the lab, struggling to learn another new character.