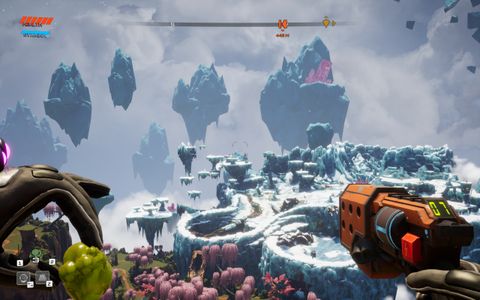 Given that it looks so much like No Man’s Sky at a glance and it’s made by former Assassin’s Creed III and Far Cry 4 director Alex Hutchinson’s new studio, perhaps it’s best to start with which games Journey to the Savage Planet is not like.

Although you and a co-op partner find yourself in a raucously colourful distant planet scanning its local life forms and scavenging raw materials for crafting, it isn’t anything like as non-linear or as vast as No Man’s Sky. And sure, there’s a gun occupying the bottom-right of the screen, but Far Cry In Space it is not. What Typhoon Studios have made with their debut title is something else.

Something that gives you a real sense of being stranded in a huge and uncharted alien environment, but carefully curates your path through it. That path takes you through platforming sequences, boss battles, mob fights and environmental puzzles and often calls upon you to double back and use a new bit of kit in an old area to access previously out of reach places. It does all this while regularly making me laugh along with its story beats, and making me care about its central mystery: if the planet’s supposedly bereft of intelligent life, what’s that enormous tower doing right in the middle of it?

It’s a comedy-metroidvania-survival-shooter-platformer, then, a kind of Subnautica among the stars with extra bells and whistles. As a Kindred Aerospace employee shot out into the farthest reaches of who-knows-where to chart the planet and see if there’s anything worth the company’s time, you find yourself in a pickle when - stop me if you’ve heard this one - your spacecraft’s damaged during landing. A voyage of discovery’s required to survive and source the parts needed to fuel your journey back home.

A simplistic enough setup which does the heavy lifting needed to contextualise your scrabbling for aluminium and feeding indeterminate nutritional paste to small birds in order to collect their carbon-rich poop. But it has real life breathed into it by the outright silliness of JTTSP’s writing.

Humour’s famously subjective, and perhaps your own experiences of the comedy here will be like watching a friend do karaoke while you’re mid-dental examination, but I doubt it. Pitch-perfect live action commercials for sci-fi gubbins punctuate your forays into the planet, aping the frothing sales pitches of ‘80s toy commercials and instructional videos, and I grew to actively look forward to Kindred CEO Martin Tweed’s next video communication with me. Even the behaviour of the loading bar on your vessel’s computer got me. Really. A funny loading bar.

The game might even be hoist on its own petard here because when it’s played in co-op, it’s easy to let your Discord bantz drown out the jokes, or to race ahead without stopping to appreciate the details. In fact, this may actually work better as a solo game all-round. So much of your progress is about making sense of the area’s topography and figuring out how to manipulate the flora and fauna so you can delve deeper into it, and if you’re lost alone you only have the problem of finding your way again. If two of you are lost in different locations, a lot of your time’s spent first trying to figure out exactly where each of you is lost, /then/ finding the critical path. I’m certainly not complaining that co-op’s available, but rather recommending a more antisocial approach if you feel knee-deep in the progress treacle with a friend.

It’s an interesting mix of aggressive wildlife, cutesy fauna and joyously weird scenery that entices you deeper once you’re outside the safety of your crashed ship, and JTTSP plays on this deviously. Pufferbirds, the first sentient beings you encounter, are at least 50% eyeball and their trusting coos are impossible not to find endearing. In a purely mechanical sense, they exist to produce carbon when you feed them Grob. Grob is a purple-ish canned food paste that tastes, according to its promotional materials, anywhere between beef, lamb spleen poutine and cucumber shitwater, but that’s by the by.

What’s more pertinent is that if you overfeed Pufferbirds in your quest for carbon, they simply pop. Maybe that doesn’t sound like a big deal to you, but I can’t tell you how wracked with guilt I felt upon that discovery. Worse, the only way I found to make it past a Meat Vortex (think organic waste disposal) was to lure those wide-eyed, innocent Pufferbirds into vortex-sucking range and continue along the path while they were being eviscerated. You beastly devils, Typhoon Studios.

Very little of the plants and creatures around you is there just to fill the space, and there’s a mild puzzle element to almost everything with a pulse. The bee-like critters who plague your progress at the base of the tower can all be killed in one fell swoop by shooting their hive, while the amber shields on some enemies can be corroded by the acidic fruit of Blight Bomb plants.

There’s always a reason to pay attention to your surroundings here, one that goes beyond the game just looking nice. Although let’s take a second to appreciate that yes, it does look very nice. Remember when indies looked generations behind triple-A releases? Or, you know, gave some indication that they weren’t made by a team of 1000 people with millions of dollars to spend? The detail on small items and variety of idle animations to its fauna is matched by its knack for pulling together a gorgeous vista with a painter’s eye for framing in just about any direction.

The irony is that the closer you come to fuelling your ship and starting the journey back home, the more bewitching your current climate becomes. The simple rules of each biome - use Grapple seeds to scale the Cliffs of Mt. Gzarfyn, double-jump between the mushroom pads of the Fungi of Si’ned VII, lob Blight Bombs in the Matriarch’s Lair - become a kind of second nature that roots you to the place and turns a once totally alien landscape into something fondly familiar. It’s not doing something radical in its own right, but the blend of established genres and mechanics at the heart of Journey to the Savage Planet are still expertly chosen and blended together like a muso’s mixtape.