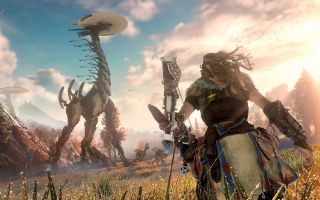 Is Horizon: Zero Dawn coming to PC? Nothing is definite, but evidence is sure pointing toward yes. Sony has yet to confirm anything, but a Kotaku report is confident that the PS4 exclusive is PC-bound sooner than later.

A big-budget PlayStation exclusive getting a full release on PC would be a big deal for Sony, and it'd say a lot about where gaming is going. For the past few years, Microsoft has led the platform agnostic charge by bringing every first-party Xbox One release to PC. The publicity has been great for Microsoft, but the real winners have been players. Bolstered by crossplay, what box you're gaming on has never mattered less. Sony has been slow to embrace this strategy, but it looks like that could be changing soon.

According to a report from Kotaku's Jason Schreier, Horizon: Zero Dawn is coming to PC. Schreier's info comes from three Sony sources kept anonymous to protect their identities. This doesn't mean it's a sure thing, of course, but it's worth taking seriously. Schreier has a good track record for accuracy and there's no reason to believe this news will be different.

Kotaku: Horizon might come to both Steam and Epic Games Store

Kotaku's report also specifies that Horizon: Zero Dawn may come to both Steam and the Epic Games Store when it comes to PC, though that decision "may not be finalized yet." That makes sense, as Sony would likely want its PC ports accessible to as many players as possible. The industry giant doesn't necessarily need the funding boost of Epic's attractive exclusivity deals.

For comparison, Death Stranding (a Sony-published PS4 game) is coming to both Steam and Epic Games Store sometime in Summer 2020. 505 Games is publishing Death Stranding's PC port, not Sony, but the strategy could inform how Sony approaches releases for its own games in the future. Coincidentally, Death Stranding runs on Decima, the custom engine built by Guerilla Games for Horizon: Zero Dawn.

As noticed by ResetEra user Stygr, Amazon France briefly listed a PC version of Horizon: Zero Dawn on the website. It's just a listing for now. There's no box art or screenshots that clearly indicate it's real, but it's unlikely to be a coincidence. Sony could make the official announcement sometime soon. Maybe even on February 28, the two-year anniversary of the game's release on PS4.

Sony hasn't said anything official, yet

Sony has yet to comment on rumors of Horizon: Zero Dawn's PC port. This is business as usual: Sony has a long history of not commenting on "rumor or speculation" on almost any subject. No matter a rumor's veracity, the company prefers to wait until it's ready to announce something.

If the rumor is true, Sony could be planning to drop the news soon. A full reveal event for the PlayStation 5 is expected sometime in February. If Sony announces a Horizon sequel or a PS5 version of Zero Dawn, it'd be a great time to talk about the PC version as well.

A Horizon PC port lines up with other Sony game rumors

Part of what gives Kotaku's report believability is that Sony is currently on a hot streak with similar PC port rumors for other games. Job postings at Naughty Dog for programmers with Nvidia and DirectX 12 experience naturally suggest that a PC version of The Last of Us Part 2 could be in the works. It's been an open secret for years that Media Molecule's Dreams will someday be on PC.

Heck, Sony itself announced that its hit baseball series MLB: The Show is going multiplatform as early as 2021. Some have speculated that this may be a special deal struck so that Sony could keep the exclusive MLB game license. That's possible, but considered with other evidence, Sony seems to be (slowly) unlocking its walled garden.

As someone who has played many hours of Horizon: Zero Dawn on a controller, it'd feel fantastic on a mouse. The extra precision allowed could make combat with Aloy's bow even more satisfying. Twitter would flood with gifs of impressive trick shots against the game's humongous robo-dinos.

Of course, mouse precision would also be felt with a higher FPS. On PS4, the frame rate is locked at a constant 30. That's understandable for such a gorgeous game on 2013 hardware, but I'm eager to crank up the frames and watch the glorious results.