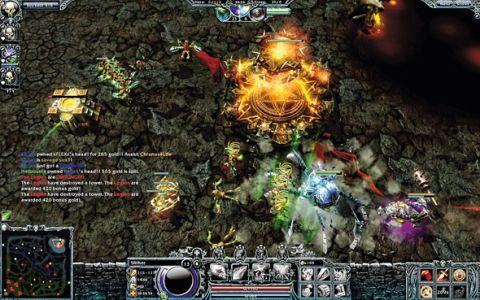 A fairly arcane design and an unfriendly community make for difficult entry barriers. The mechanics are honed and solid, though.

At the time of writing, Heroes of Newerth is in the late stages of 'open beta' and ripe for review. It's a tower defence game along the lines of classic Warcraft 3 mod Defence of the Ancients, and the ultra-popular game mode has a clear and far-reaching influence on Newerth. It's also enormously popular, with over a million people having signed up to the beta, brimming server populations and 50,000 people online at any one time. Even before its official release, Heroes of Newerth has become one of the great, unnoticed communities of the PC gaming world.

Just as in any other tower defence design, there are towers and creeps – the mobs of beasties that march in waves across each map – but you don't place towers here. Instead, you take the mantle of one of 62 fantasy heroes, and fight both creeps and other players. This takes place between two teams of one-vs-one through to five-vs-five server populations, and I suppose you could argue that the game is something like 'real-time tactics', since the only things you really manage are your hero and your coordination with other players on the same team.

All this, of course, will be familiar to players of both Defence of the Ancients and the more recent Gas Powered Games take on the concept, Demigod. I come to the game with plenty of time with Demigod and no experience of Defence of the Ancients, something that clearly puts me – and any other beginner – at a bit of a disadvantage from the start.

Terminology, mechanics and community have all been borrowed from Defence of the Ancients, and wrapping your head around the nuances of Heroes of Newerth is far easier if you already have some familiarity with the mod that inspired it. S2 make no bones about it either; this game is very much designed to replace Defence of the Ancients and modernise it for the same dedicated community.

This approach comes with an inherent bonus for the game's developers: there's already a huge, enthusiastic group of players ready and set to fill their game. Defence of the Ancients had created such a large community that a mature offering, without the catastrophic server issues that Demigod faced on launch, has immediately created a superb environment for what is essentially an indie multiplayer title. Often, such titles fail to gain the necessary inertia to pull in a community big enough to sustain themselves. No such problem here, because refreshing the game browser pulls up hundreds of games at any time of day. There are always people to play against. It's also at this point that the problems for a beginner might start.

By the time you hit an online game, you'll already have played the tutorial, which will have explained the core concepts behind levelling up your hero and making them effective on the field. There are two variables to worry about: gold and experience. You get experience by killing creeps – which are released from the bases of both teams with increasing abundance as the game progresses, or can be found on the neutral woodland core of the map – and other heroes. You also get a regular payment of gold. However, to get it in the amounts you need, you have to master 'last hitting', which means getting the killing blow on a creep. This is one of those awkward skills a game requires you to perfect without really explaining why. It's probably the first clue you'll get as to Heroes of Newerth's high skill requirements.

The second clue to the high barrier for entry comes with the shop. The hero you choose has four innate powers, which can be levelled up as you play with that individual – standard RPG type stuff – and you'll instinctively understand that you need to max-out particular powers depending on your play styles. The shop, however, offers dozens more items that you can fit into six slots in your inventory. Every item consists of multiple ingredients, each of which must be purchased to create any given item. It seems like a bizarrely arbitrary extra layer of detail we could have done without.

All the items have quite different effects, modifying everything from movement speed to damage output, from mana regeneration to one-use health reclamation. The complexity of Heroes of Newerth lies not in its overall model – for the team vs team tower defence concept is simple – but in learning useful builds of both skills and inventory items for a number of the 62 different heroes.

You could do it by trial and error, but it's probably safer to simply back out of the game and watch a few more video tutorials, then read some guides online. You're going to learn about the combat across the map, how to play the waves of creeps to your advantage, how to nail that last-hitting thing and how to stay alive in a fight, simply by practice. But working out what an effective build for a given character might be is going to take homework.

It's also going to take patience. Learning in public means braving Heroes of Newerth's judgemental community. Said community is divided into 'noob' and pro servers, but even this doesn't guarantee a friendly game. Be sure that your skill rating matches that of the server before entry, or you can expect to be ruthlessly booted. Such is the dependence of a team on its members, that anyone messing about is going to find themselves apologising profusely to experts who expect more of their allies.

This is true of almost any PC multiplayer community, of course. The problem here being that open servers are really the only way to learn a game that, I sense, is only at its strongest when people are playing organised matches of roughly similar-skilled players. The times when I've found that combination on a public HoN server have been rare: more often than not, players either quit and skew the game, or one team angrily concedes before the match is really decided.

There are some other wider issues for general play, too. One is the speed with which many of the skills can be executed – being 'ganked' (that is, killed without any real recourse for defence or escape) is all too easy, particularly if you've lagged a couple of levels behind in the vital and busy portion of the game that's focused on killing creeps and levelling up. The fact that defeated heroes lose gold and their enemy gains it on each kill can quickly skew things in favour of one side, causing a failure cascade and a collapse of one side. To HoN's credit, this often takes 20 minutes or so to become clear, but a secondary punishment of extended respawn times for the killed player only compounds what is ultimately an unfair design.

That design is essentially a rebuild of Defence of the Ancients that's subsequently been augmented with statistics, skill rankings, social factor records – such as whether players regularly quit servers – and then the huge cast of heroes themselves. It looks brilliant and has clearly been a Hadean task of balancing and build-tweaking. That said, the crucial problem for me is that it demands players master a set of skills that I don't find rewarding.

I understand the urge to master a traditional RTS, with layers of resources, the spread of units and the rapid build of technology, because it becomes an almost craftsman-like challenge in games such as StarCraft. Multiplayer battles that require skill in movement and aim – as you get in first-person shooters – also make sense to me. But the combined control skill of HoN's RTS heroes and memorising effective builds leaves me quite cold. The rewards inherent in the process of playing don't seem to match the demands it places on the player.

That's not to say the game doesn't look good against its peers – League of Legends, Demigod and the original Defence of the Ancients – just that it's going to have a certain kind of community – one that demands much of its members, and cements that notion certain people have of PC gaming being technical and unapproachable. That's both good and bad.

Ultimately, Heroes of Newerth leaves me with similar feelings to those I experienced when I bounced off both Quake III and EVE Online the first time I played them. There's something complex and difficult here that will – and clearly does – reward persistence. Nevertheless, the combination of unpleasant individuals in public servers and the overall lack of reward in the game itself means I'm unmotivated to go back and refine my skills. Popular it may be, but I just can't recommend the experience.

A fairly arcane design and an unfriendly community make for difficult entry barriers. The mechanics are honed and solid, though.